There is only a small field for this handicap chase over three miles and a furlong, however they look closely matched and it’s an intriguing race.

Godsmejudge is the outsider of the five, currently priced around 12/1. He hasn’t been in the winners enclosure since winning the Scottish Grand National in 2013, and has slipped down the ratings a lot. He has been rated as high a 148, so he is 33 pounds lower than that now, therefore if a return to favourable conditions bring some of the old spark back, he could still be a player.

Venetia Williams runs Renard here today, and she has some useful form at Warwick. Over the past year she’s had four winners (25%) and six places (37.50%) from 16 runners, for level stakes profits of 3.50 and 1.57 respectively. You can see this detail by clicking on the black trainer icon below the horses name. Renard is twelve years old now, however he has been running consistently of late, with a third and two second places in his last three races.

The Shortlist report is available to all users on a Tuesday and it is very good for highlighting horses that are well suited by the racing conditions.

Godsmejudge is on The Shortlist with a score of nine, having two sections of green and three of amber. As mentioned above, he has fallen to a very attractive mark and given he has conditions in his favour, he has the potential to run a big race at a nice price.

Rocknrollrambo has three sections of green when looking at the Instant Expert report. This appears to be an optimum distance for him, having won three times from nine attempts, and he is also very much at home on today’s good ground. He is just the five pounds higher than for his last win, has been in excellent form so far in 2017, and looks a worthy favourite.

The Pace report shows us that early leaders here over this distance do very well, with 23.68% of them winning. That has produced a very small level stakes loss however, and although prominent runners have a lower win percentage (16.67%), they have produced a level stakes profit of 15.40.

Renard is a confirmed front runner and looks very likely to be taking them along again today. Godsmejudge looks sure to be tracking him, with the other three runners usually content to be held up. 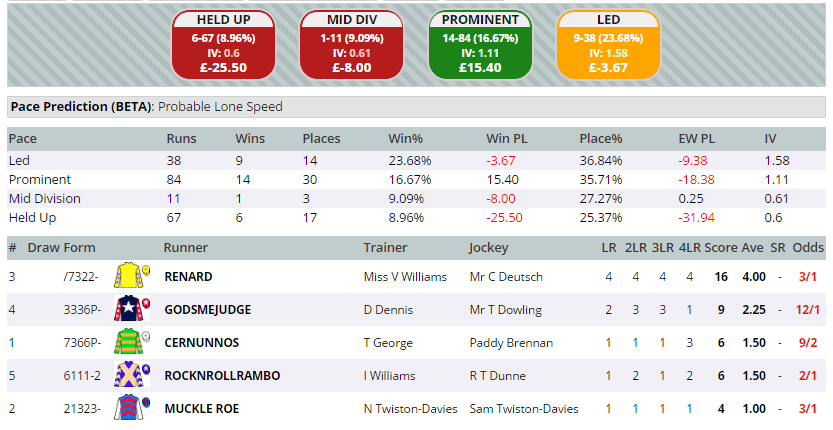