The Betway Yorkshire Cup is run over one mile and six furlongs, and is a Group 2 contest.

Dartmouth, trained by Sir Michael Stoute, is the current joint favourite at 4/1, and runs in the Queen’s colours. He’s a very consistent horse and hasn’t been out of the first three on his last six runs. Stoute has been in fine form recently, as well as having a very good record here at York. What really stands out for me, is his record with horses returning from a break. For runners that haven’t run for at least 60 days, he’s had 39 winners (22.16%) and 91 places (51.70%) from 176 runners, for level stakes profits of 43.53 and 53.57 respectively.

The other joint favourite is Muntahaa, trained by John Gosden. He has a particularly good record with last time out winners, being 67/219 (30.59%) for a level stakes profit of 44.32. 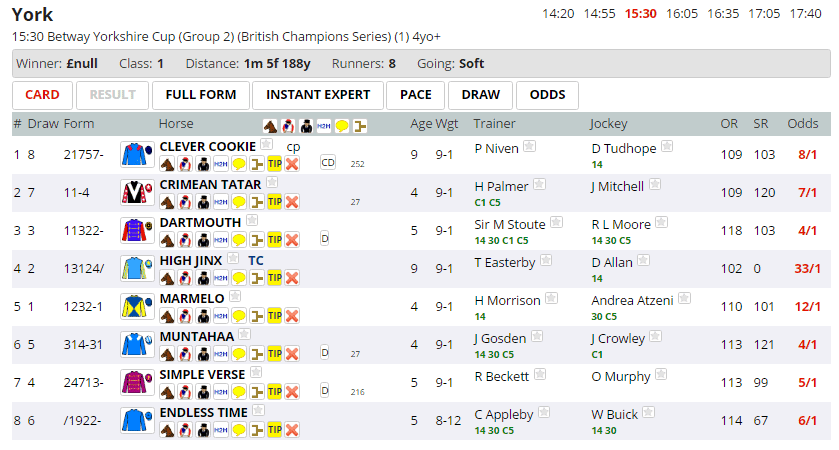 As could reasonably be expected for a race of this class, there are a lot of green sections on the Instant Expert report.

However, it is Clever Cookie who really stands out, with a nice full line of green. One of the highlights of this for me, is that he has won four out of his six races on soft going, which is a massive plus. Today’s distance of fourteen furlongs appears to be about the optimum trip for him too.

From looking at the Pace report we can see that this race clearly favours those runners that are held up, and come through the field in the final fews furlongs. Held up runners have won 11.25% of their races, for a level stakes profit of 78.15.

It looks very likely that Muntahaa will be setting the early pace, as he has easily the highest pace score, based on the last four runs for each horse.

Dartmouth and Clever Cookie are both usually held up, and I think Moore and Tudhope will do the same here today. 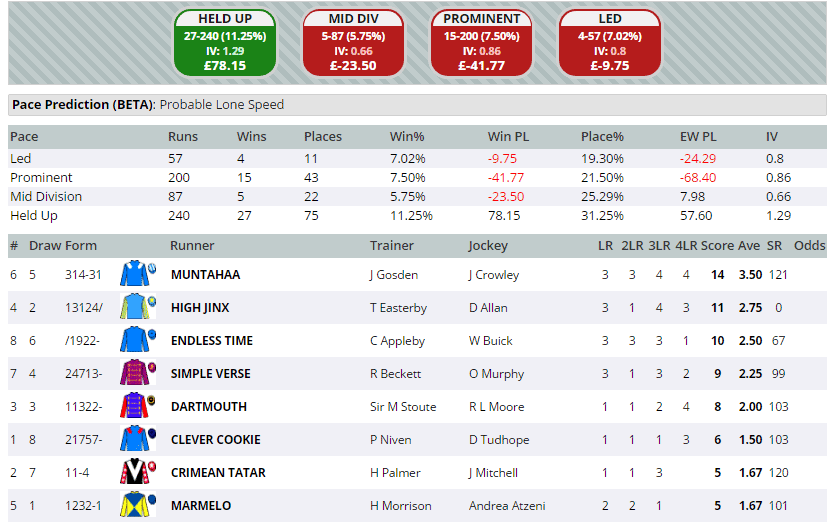 Horses For Courses is the report that is available to all users on a Friday, and it confirms what an excellent record Clever Cookie has here at York. He has won four times from eight races (including this race last year), for a level stakes profit of 10.75. The drop back down to this trip looks certain to favour him, and in what is a very open race, I think he can prove to be a value play at 8/1.