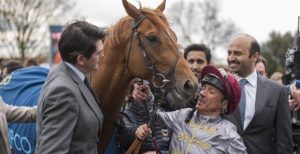 Regular readers of these thoughts will be in little doubt that I enjoy digging out statistics, writes Tony Stafford. Many will be suspicious of them, indeed the well-worn phrase, popularised by the American author Mark Twain, who attributed it to the 19th Century British Prime Minister Benjamin Disraeli, says “there are three kinds of lies – lies, damned lies and statistics”.

Senior politicians on either side of the Atlantic have had cause to question the worth and veracity of public opinion data following several elections, but I still go with the credo, “facts is facts”.

I’ve no idea whether the ever upwardly-mobile Newmarket trainer Hugo Palmer sets much store on figures, but after the tame effort by Galileo Gold, last year’s 2,000 Guineas and St James’s Palace Stakes winner in the Lockinge Stakes, sponsored by his owners Al Shaqab at Newbury, maybe the alarm bells are starting to ring, if only sotto voce.

Before the big race, Palmer was stood in front of the exit from the parade ring, exhorting his horse’s groom to “go straight out” onto the track, only for an official to bar his way and point out the Group 1 requirement for “a parade” and therefore the need for the horses to go out in a precise order.

Palmer’s body language, and where one could hear it, audible language both suggested irritation. A second irritation soon followed when the expected pacemaker, Toscanini, there to give a lead to Godolphin’s Ribchester, missed the break.

That left the two principals out in front, and while Ribchester, leading the main group up the middle stayed there, Galileo Gold raced more freely than desirable under the stands rail where he had been taken by Frankie Dettori. He faded away into sixth, a dozen lengths or so behind the emphatic winner.

Towards the back end of last year, Ribchester twice inflicted defeats on Galileo Gold, thereby reversing the relative positions of the pair from midsummer. Here the market anticipated a similar outcome, but hardly one with such a disparity. The trainer had said before Newbury that the harmonious partnership between horse and jockey was back where it was at 2,000 Guineas time last spring, but whatever the reason, that was not the case this time.

With two stables, one on either side of Newmarket and a horse complement according to Horses in Training of 170 inmates – less the odd inevitable departure through erosion – the expectation from Palmer will be again to beat his latest annual tally of 71 winners. That followed scores of seven, then six and the acceleration to 15, 24, 34 before more than doubling that tally in 2016.

Last week at York, the Makfi filly Vintage Folly delighted her trainer when runner-up to Shutter Speed in the Musidora Stakes, encouraging Palmer to make optimistic noises in his post-race TV interviews about her prospects of going one better in the Oaks, in which his Architechture was second a year ago.

But in all honesty – no lies, or damned lies in sight – Hugo’s stats for the past fortnight have been poor, and for the past few days since Vintage Folly, simply dreadful.

From 28 runs in the two weeks analysed, with horses from Kremlin Cottage and the new Yellowstone stable in Hamilton Road, he has had a single winner of a Lingfield maiden race. Of the remaining 27, Racing Post ratings calculated that three had improved on previous figures; four, presumably debutants, got no rating and the remainder ran below form, many to an alarming degree.

Palmer’s 2017 tally has been boosted by eight all-weather wins, all with three-year-olds, from 45 runs, but on turf, his 55 contestants have managed only four wins, for a combined tally of 12. Richard Fahey, admittedly with a stable containing many more inmates than Palmer’s, has sent out 59 winners, 35 on turf.  There’s plenty of time for the tide to turn, but the combination of few wins and poor performances that have typified recent activity cannot be argued.

One trainer friend who has rather less regard for BHA handicappers than me trotted out his favourite phrase: “You couldn’t bend wire like them” about one piece of evidence on today’s Carlisle card. It was in response to my own pointing out the apparent idiotic handicapping of a well-known stayer.

Over the years, the now 10-year-old Teak has been up to the high 80’s and was at that point early in 2016. By the autumn he was running off 80, and his Cesarewitch 13th of 33, 14 lengths adrift of Sweet Selection, was hardly a sign of deteriorating ability, with 20 decent stayers behind him.

That race was his last Flat outing on turf, as after that he ran unplaced in a stayers’ race at Chelmsford; made a fair stab at a Newbury hurdle race, before switching his attentions to the sharp mile and a half around Wolverhampton.

It was at that track that he won the first two races he had for his new (and still) trainer Ian Williams after switching from Adrian Maguire (who I was delighted to see, beat a Mullins hotpot in yesterday’s Limerick bumper, ridden by Finny, his talented son. Let’s hope Adrian reconsiders his decision to retire soon).

Nowadays Teak, former winner of the two mile five furlong handicap at Glorious Goodwood needs further, so it was with some surprise that I noticed the official responsible for two-mile handicaps, allowed Teak’s rating to drop from 80, via 74, his all-weather mark for the Chelmsford race to 62 after the triple Dunstall Park whammy. And whammy it was, with apprentice Luke Catton, who is yet to ride even a single winner, entrusted with the mount on each occasion.

Today at Carlisle, Teak steps back into turf stamina tests in the two mile, one furlong finale, and, blow me down, not with Luke Catton, but last week’s Group 2 Dante Stakes-winning jockey Franny Norton stepping in. It’s as near to a certainty as you’d get, an 80 horse running off 62 on his next comparable appearance, and it should certainly be enough to foil Jan Smuts’ bid for victory in his 100th start.

Frankel, possibly to media relief, got his first Classic win in Japan over the weekend, but over here, six wins for his old rival and fellow Galileo-sired stallion Nathaniel, offered hopes that the Newsells Park inmate is beginning to flex his own Group-race muscles.

Natavia, carrying the Frankel colours of Prince Khalid Abdullah, was an emphatic winner at Newbury on Saturday and trainer Roger Charlton has a high opinion of the filly. Maybe the Ribblesdale at Royal Ascot will suit her.

It was horrible to hear about Hughie Morrison’s predicament. The only good thing of his anabolic steroids situation is that nobody who knows him and the way he runs his stable, believes for a moment that he would ever have anything to do with giving a banned substance to a 50-odd rated filly, or anything else. He seems convinced that unless the police can uncover the true culprit, he is sure to face a long ban. I’m not so sure. The BHA writes its own Rules, so it can change them if the situation fits.