This is a one and a half mile handicap on the all weather track at Wolverhampton.

It is quite a poor quality of race, being for those rated 0-60. Pretty Jewel is at the top of the Speed Ratings, with a mark of 57. It is her first run for trainer Kevin Frost today, as can be seen from the blue ‘TC’ (Trainer Change) after her name.

Adam Kirby is the specialist jockey on the all weather courses, and he usually gets a few choices in these types of races. He rides Speculator here today, and he has tumbled down the weights after some very average performances. Kirby has a very good long term record here at Wolverhampton, and he has also been among the winners over the past few weeks. He’s had eight winners (22.22%) and 15 places (41.67%) from 36 runners, for level stakes profits of 3.58 and 0.12 respectively. 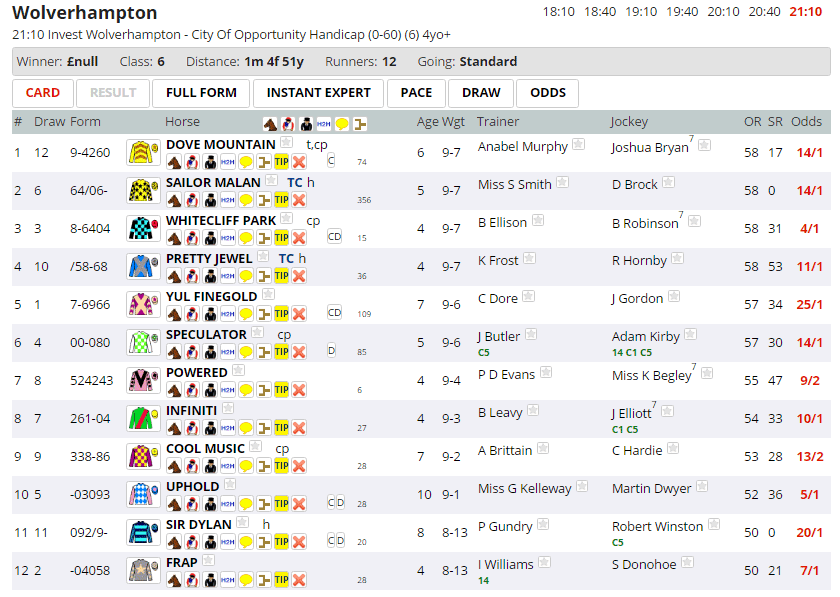 Whitecliff Park looks one of the better runners when looking at the Instant Expert report on the ‘Place’ setting, as he one section of green and three of amber. He has been placed three times here at Wolverhampton, and he is actually one pound lower than than the last time he won.

The ten year old Uphold, has one section of green and four of amber, showing how well suited he is by today’s conditions, if he can rediscover some of his old form. However, he is a full 30 pounds lower than for his last victory, which shows he has been on the decline. He did make the frame in a similar level of race last time out, meaning a place here isn’t out of the question.

Horses that race prominently have the best record here over this distance, although it is quite close between all four running styles, and as there are no green sections, there is no real bias.

Uphold has the highest pace score based on the last four races, however there doesn’t appear to be any real front runner in this race, meaning that is may be a muddling sort of pace, and leaving it to a mad dash for the line a few furlongs out.

The majority of the field do like to be held up, so it will be interesting if somebody tries something different, and goes off out in front on their own. 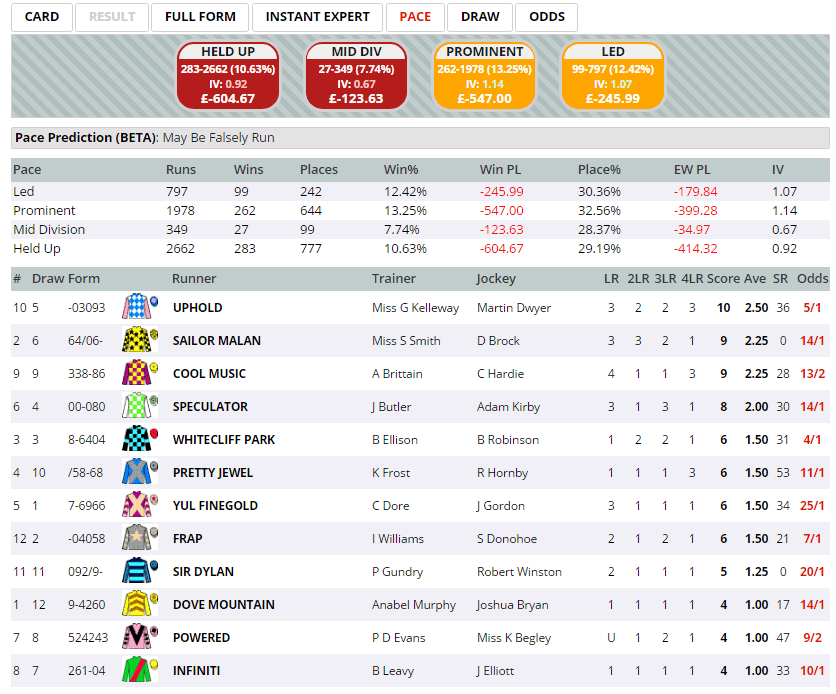