There is some excellent content flying around for Royal Ascot at the moment: some tipping, some trends and mini-systems. But there are also some missing bits. So, I thought I’d bring all those strands together in a post you’ll want to keep close to hand in the run-up to, and during, Royal Ascot 2017.

So far so not very useful, although following APOB and Wes is probably not going to do too much damage to the old betting tank if you want to keep it super simple.

There is a similar look to the top juvenile trainer table, with Aidan O’Brien and Wesley Ward atop the pile. John Gosden is another noteworthy performer with his two-year-old runners. And note the father/son Hannon axis: both make the top five, though both fire(d) plenty of bullets and are/were loss-making to follow blindly.

Because the two-year-old races at Royal Ascot are all run over a trip of seven furlongs or less, which aligns with the cutoff I’ve used for my ‘sprint’ definition, there is obviously some crossover between the above table, and the below one.

Nevertheless, there are other names to conjure with, in non-juvenile sprints, amidst the already familiar monikers. The likes of Robert Cowell and Eddie Lynam, as well as James Fanshawe, can be relied upon to be competitive with any horse they deem worth a place over a sprint trip.

This is bloodbath territory in the main, as the following table, sorted by number of places, illustrates. Mudslinging abounds, in the – often faint – hope that some of it may stick to the royal wall. Nobody said finding winners at Royal Ascot was easy, but fans of trainer patterns need to move along prestissimo if hoping to unlock three-year-old handicaps from a cursory check of the handler rosters…

I included all those down to our mate Aidan, whose one winner and one further place came from a smallish number of runners. Mick Channon and, in a less punter-friendly breath, Saeed bin Suroor deserve mention for maintaining an impressive place strike rate of one-in-three. Both ought to be noted with 3yo ‘cappers. Tom Dascombe, too, from a very select group of nine entries has managed a brace of victories and a further placing. Good effort.

The flip side of the coin is the lamentable showings from the Hannons – 1 from 52 collectively – and Mark ‘Always Trying’ (but rarely succeeding in this context) Johnston. His 48 runners is a divisional top, and his two wins could be argued to be an over-achievement based on just six places. Sir Michael Stoute’s 21 runners have failed to yield a winner, but his 29% place strike rate implies he’s been unlucky. Stoute-trained animals will rarely offer value – outside of second time maiden starters – but I wouldn’t be remotely tempted to lay his Classic generation handicappers.

The Royal meeting tends to split its handicaps between those for three year olds, and those for older horses, whereas most everyday cards generally hurl all-comers in together. So it makes sense to review trainer-based performance with a similar split.

The Johnston phalanx again heads the volume table, his two winners from 36 another fairly paltry return. But the 25% win/place figure is much more respectable. So too are the 35% and 40% place returns of Saeed bin Suroor and Sir Michael Stoute respectively. John Gosden is to be feared with his older ‘cappers at the Royal meeting, scoring five times since 2009 from just 22 runners.

Trainers whose runners in this context induce caution, for this scribe at least, include Richard Fahey, Andrew Balding, Charlie Appleby, David Simcock and Willie Haggas, their aggregate return being two wins from 116 starts, with a hundred of them out of the frame. Ouch.

As with the overall trainer ranking, it wouldn’t take Einstein and a class full of Oxbridge science graduates to figure out that Messrs. Moore, Dettori, Buick and Spencer would be near the peak of their peer pile. The Irishmen, Johnny Murtagh and Richard Hughes, were also front rank before revising their focus from riding to training Royal Ascot winners.

It tends to be the case that jockey form is largely a factor of the guy in the morning suit legging him up, and the riders in the overall table represent the most powerful stables at the meeting.

Whilst there remains a solid correlation between the ability of the beast and its trainer, and the performance of the jockey, it can be argued that in the uber-competitive cauldron of Royal meeting handicaps, a rider’s skill is tested to its full. In such a scenario, one may expect to discern pilots whose bravery, strength and tactical acumen elevate them from the pack, like a Wokingham winner surging clear in the final fifty yards.

Moving swiftly on from such a naff analogy, here we see a somewhat different story, albeit with recurring themes. Ryan Moore has the highest each way percentage of those currently riding to have steered ten or more Royal Ascot handicappers since 2009. He is the best jockey riding in Britain – arguably the world – today, and he regularly proves it on the biggest British stage.

The title of this section maybe intimates that there is a draw bias at Ascot. That may or may not be the case. Happily, using Geegeez’ Draw Analyzer tool we can ask some pretty searching questions to test the hypothesis.

The forecast is for warm weather and the ground is riding fast, so let’s check all handicap races run at Ascot (not just the Royal meeting) since 2009 on good ground or quicker. And we’ll select the ‘Actual’ draw radio button to account for non-runners (e.g. a horse drawn 13, with two non-runners inside him, would have an actual draw of 11), and fields of 14+. And I’ll apply those parameters to different distance ranges: 6f or shorter, 7f and a mile (straight), and beyond a mile (round).

We can see that there is a slight advantage to high drawn horses in five and six furlong sprint handicaps at Ascot on fast ground, though whether that is more related to pace distribution than a track bias I remain open-minded. The consistency between the win and place percentages does add some 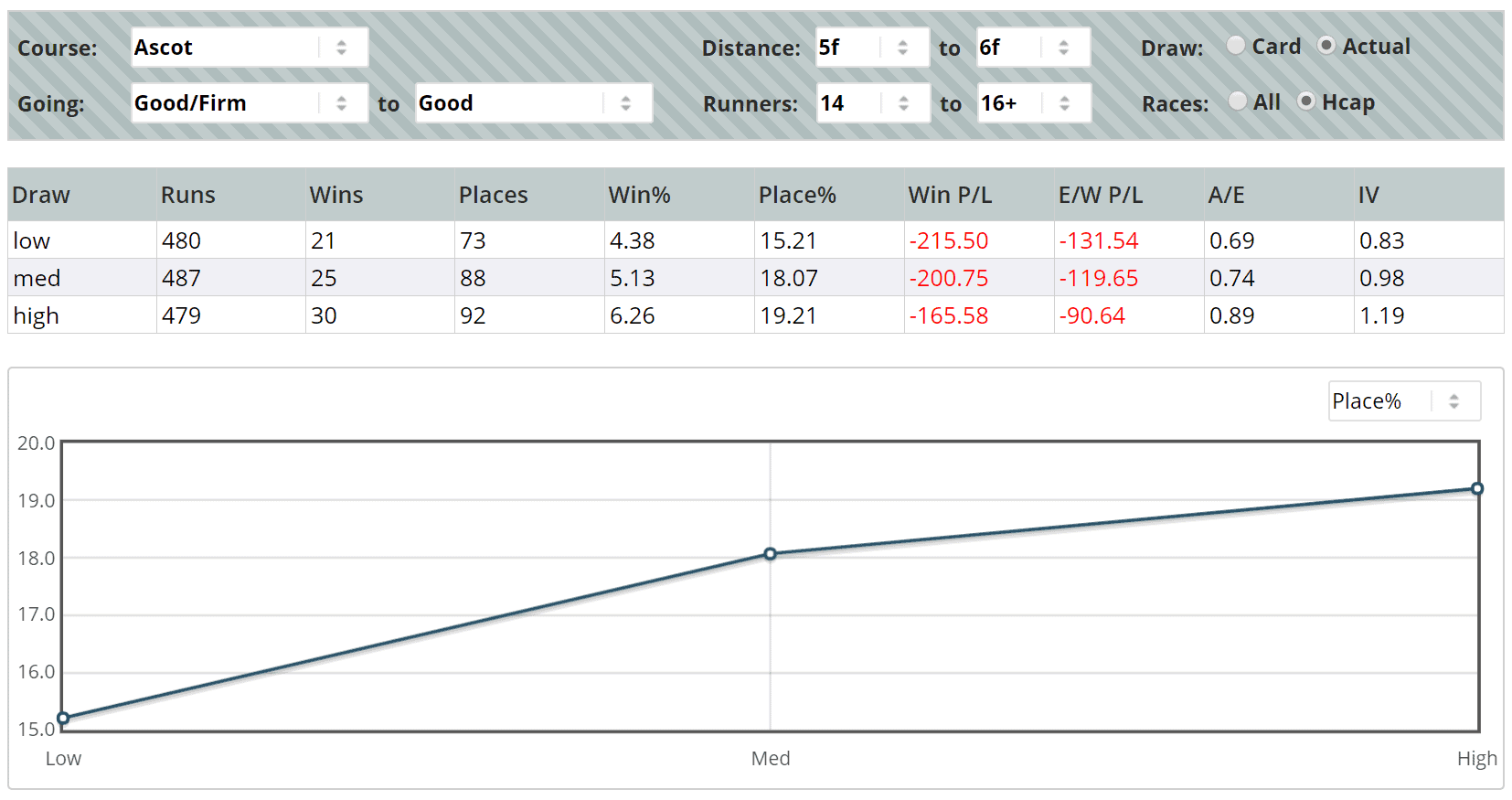 Looking at the constituent draw positions (which Gold subscribers can view in the Draw Analyzer) suggests that those drawn highest of all, closest to the stands’ rail, have had the best of it.

If that’s the shorter sprint trips, how have horses fared over longer ranges down the straight piste at Ascot? Using the same parameters, except for distance, we get a similar – if slightly less emphatic – reading. Note that the gradations on the chart accentuate what is a small disparity in place percentages between low, medium, and high.

That said, the win percentage is notably higher for runners drawn highest, suggesting that the optimal track location may again be near side. 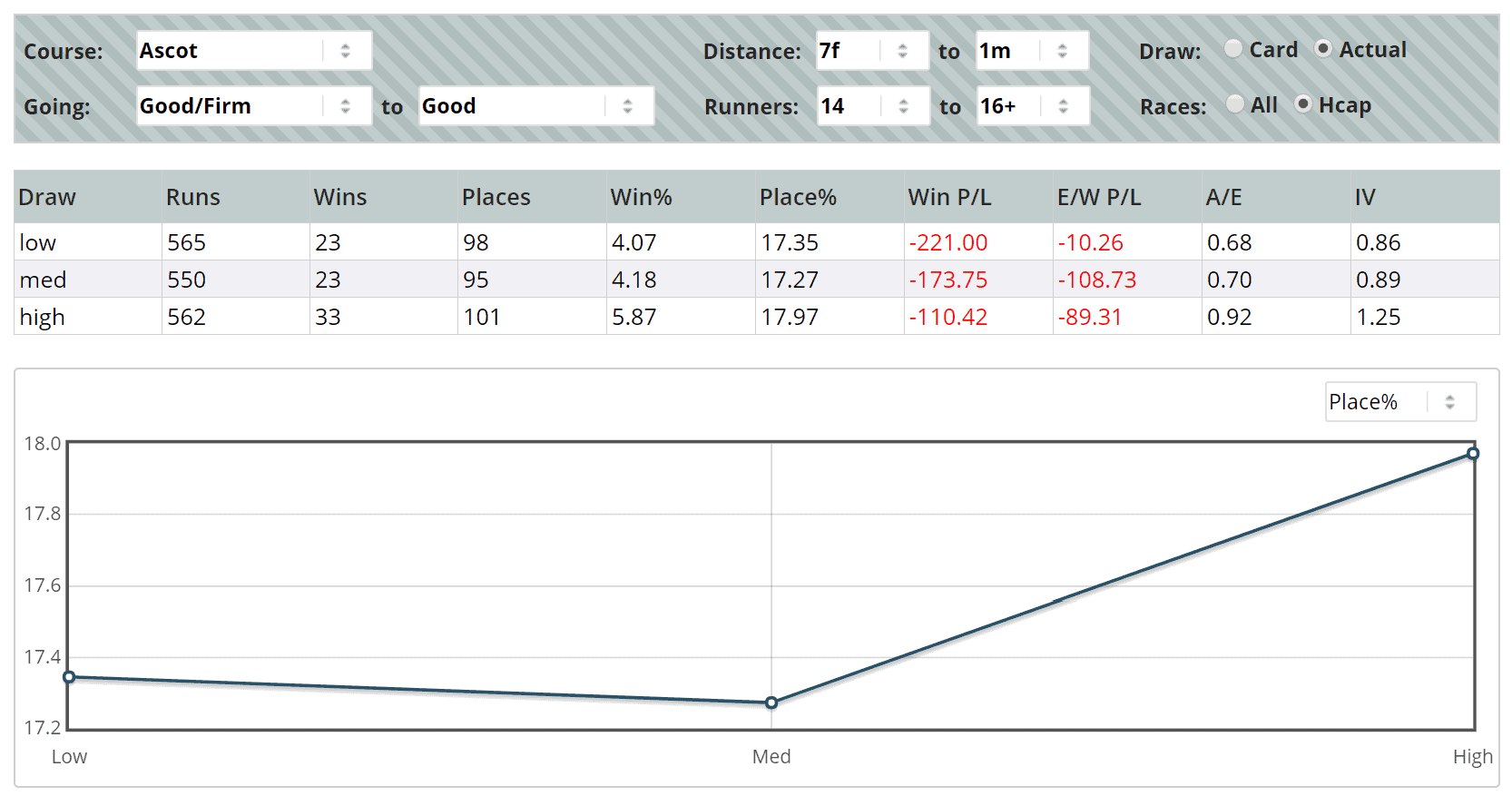 Not much in it over seven furlongs and a mile, though high still has the edge…

There’s not much in it on the round course, generally speaking. However, low to middle is favoured at a mile and a quarter in the Wolferton Handicap. At longer distances there is no discernable bias.

Here at geegeez.co.uk, we like to provide a comprehensive offering to our readers. That’s why, for every race next week, we have individual race trends, which you can peruse from the links below.

The Irish at Royal Ascot

Aside from “back Wes and Aidan 2yo’s over five and six furlongs“, I don’t have much to offer here.

But I can give a big shout to my mate, Gavin Priestley, whose Nag3 blog has some very tasty snippets, including this:

Horses running in Royal Ascot handicaps having started in a maiden last time out are 0 from 56 since 2008. 45 of those won their last day maiden before disappointing here.

For more of such juicy insights, gratis, click here.

There are likely to be some decent offers dangled in front of us punters next week. Extra places in the big field handicaps are almost a given; but there will also be ‘justice refunds’, money back seconds, boosted winnings, free bets for decent priced winners, and so on.

With the whole shebang on ITV racing – all 30 races across five days, on the main channel – bet365 will be offering their 4/1 Risk Free Bet concession. Basically, any winner you back at Royal Ascot with an SP of 4/1 or higher, will get you a risk-free bet to the same stake (up to £50) on the following race.

I like bet365, mainly because I can still get a bet on with them, but also because they offer a range of concessions and are generally price competitive as well.

97% (figure made up on the spot) of you will have an account with them already, but the other 3% should really put that right presto. Here’s the link to register.

Let’s not beat around the bush. Coming out in front at Royal Ascot is very difficult indeed. My own record is patchy to say the least. That is in contrast to one guy I know who has done very well.

Cleeve Racing’s main man, Andy, is a serious form judge and he followed up a 51 point profit in 2015 with a just above scratch effort last year. Indeed, Cleeve have made a profit from their advices at six of the last seven Royal Ascot meetings. That is pretty impressive.

No big sell here (of course). Just to say that, if you follow tipping services, this might be one you want to be involved with next week. Here’s their page.

The GOLD Standard, Every Day

Finally, while Royal Ascot’s 30 races are playing out, there will be 149 other races in the UK alone. If you think the sorts of insights at the top of this page could help find good value picks in those contests, you’d be right!

And you can take a 30 Day trial taking in all of Royal Ascot, plus over a thousand more races during the course of the next month, for just £1 (if you’re a new trialist).

So do register now and get up to speed with Geegeez Gold’s amazing stable of form tools, racecards and reports. They WILL make you a better bettor.