There are just the six runners for this seven furlong handicap at Brighton, but it is a wide open race with all six in with a chance.

Beepeecee is trained by Richard Hughes and won last time out at Salisbury over seven furlongs and on similar ground. He has been raised six pounds for that win, but is clearly in good shape and further improvement would not be a surprise. Hughes is in very good form and as over the last 14 days he’s had seven winners (23.33%) and 14 places (46.67%) from 30 runners, for level stakes profits of 18.00 and 28.73 respectively. He also has a decent record with last time out winners.

Pass The Cristal is the current favourite just ahead of Beepeecee at the head of the market, and he is chasing a hat trick after wins at Brighton and Beverley over seven furlongs. He has been raised nine pounds as a result of those two wins, and the return to much firmer ground is a worry. His two runs on today’s good to firm going have resulted in poor efforts, so he has a little bit to prove he can cope with these underfoot conditions. Both his trainer and jockey do have very good long term records here at Brighton though.

The Shortlist is the report that is available to all users on a Tuesday, and Pass The Cristal makes it onto here with a score of 11. He has four sections of green, showing he is very well suited by today’s conditions, apart from the ground which is red, and has been mentioned above.

The Instant Expert report confirms the good showing of Pass The Cristal, and also highlights that the rest of the field are particularly well suited by this race.

Still Waiting is the only other runner in the field with a green section when on the ‘Place’ setting.

Both Beepeecee and Whitely have won on today’s going however, and I think that is quite an important aspect in the context of this race.

When looking at the Pace report we can see that early leaders here over this distance have a very good record, with 19.31% of them going on to win the race, for a level stakes profit of 95.62.

Al Mansor usually pulls quite hard and is a confirmed front runner. In a field where there is little pace elsewhere, it looks very likely that he will be leading the way through the first couple of furlongs. Timmy Murphy may be able to get a very soft lead with the others waiting in behind, and if the firmer ground brings out an improvement in him, he has slipped down the weights enough to be able to take advantage and make all. 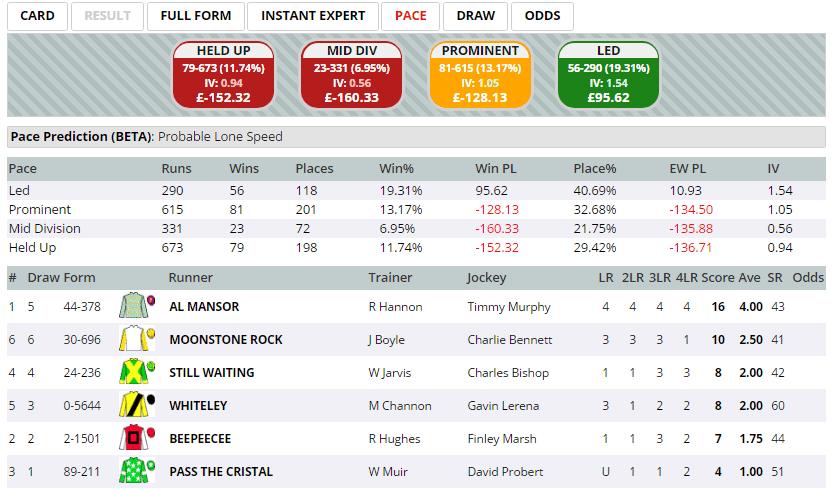