We head to the evening meeting on the all weather at Chelmsford for Race of the Day, and quite a good looking handicap being run over ten furlongs.

Warrior Prince, trained by Ed Dunlop is the current favourite and he is making his handicap debut in this race. His four runs to date have all been over a mile, so it is interesting to see him being tried over a further two furlongs. Dunlop has a 10% higher win rate with handicap debutants when compared to his overall strike rate, therefore appears very astute at placing them.

The Gay Cavalier was a good winner last time out over this distance on the polytrack at Lingfield, and only has two pounds extra to carry today. His trainer, John Ryan, has been in useful form of late, with three winners (25.00%) and five places (41.67%) from 12 runners, for level stakes profits of 29.00 and 31.95 respectively. 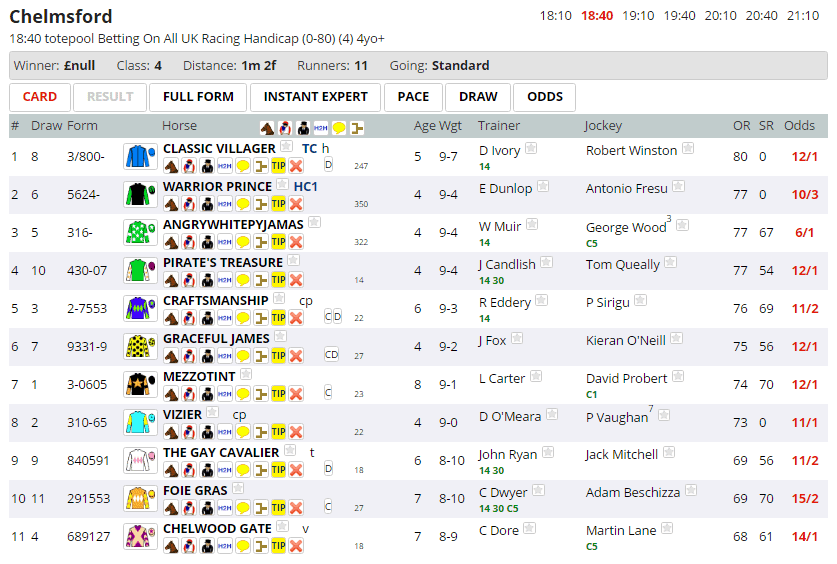 Graceful James comes out very nicely when looking at the Instant Expert report, with three sections of green and two of amber.  He has won here at Chelmsford previously, and is just the three pounds higher than for his last win. He didn’t like the good to firm ground on turf last time out, so is switched straight back to the all weather and should go well.

Classic Villager has two sections of green and two of amber, however he is a full ten pounds higher than for his last win, so will need the change of surroundings (he’s having his first run for Dean Ivory today), to bring out a marked improvement if he is going to get involved in this.

Chelmsford is a course that is known for it being tough to come from behind on, and the Pace report proves this. Early leaders here over this distance have a brilliant record, with 25.89% of them going on to win the race, for a level stakes profit of 94.40.

Warrior Prince has easily the highest pace score based on the last four races, and looks the most likely early leader. Quite a lot of this field like to be held up so it may be that they struggle to get into the race at all. 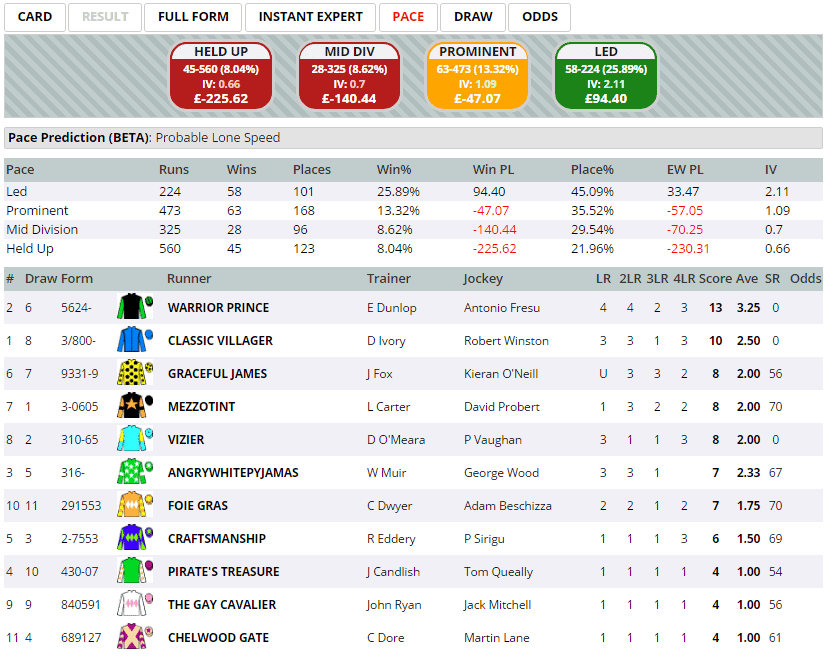 The Trainer Statistics report is available to all users on a Wednesday, and it highlights what a good long term record Chris Dwyer has here at Chelmsford. Over the past five years he’s had 27 winners (18.24%) and 53 places (35.81%) from 148 runners, for level stakes profits of 52.42 and 39.79 respectively. He runs Foie Gras in this who has been running consistently and looks to be in with a chance at 15/2.

Stat of the Day, 21st June 2017 A review of the Tips Service
Scroll to top