A nice looking handicap hurdle at Newton Abbot for Race of the Day, being run over three miles and two furlongs, on good to firm ground. There are eight runners and it is such a competitive race, the outsiders of the field are currently priced at 9/1.

There are several recent winners in the field, and in fact, every horse has won at least one in their last five outings.

Awaywiththegreys won at Ffos Las last time out over three miles, and the way he forged clear on the flat suggested that the extra two furlongs here today wouldn’t be a problem. His trainer, Peter Bowen, has an excellent record with last time out winners. He’s had 19 winners (24.68%) and 39 places (50.65%) from 77 runners, for level stakes profits of 7.58 and 6.32 respectively.

Amron Kali is an interesting runner, as although Philip Hobbs has two runners in the race, the champion jockey, Richard Johnson, is riding this one, trained by Paul Henderson. She won twice in May and in very easy fashion but was subsequently raised a total of 18 pounds for those emphatic wins. She looked to cope fairly well with the extra weight when staying on into third over an inadequate trip at Fontwell last time out, and I think she could be competitive here now upped in distance 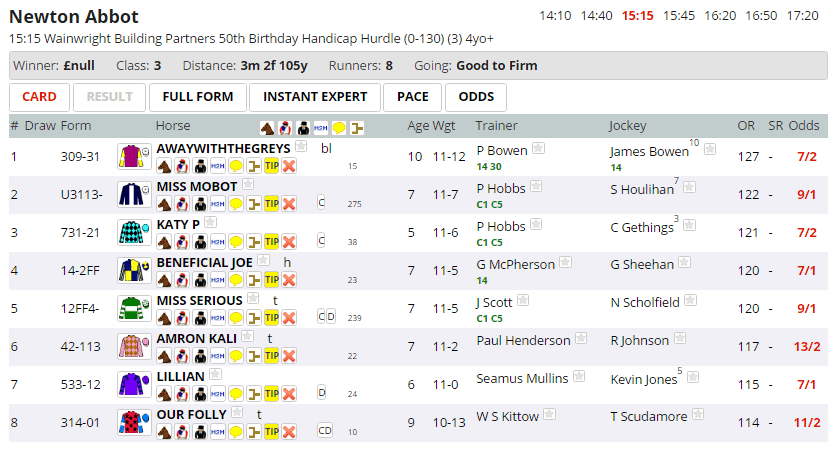 There are a few runners in this field that have two sections of green when looking at the Instant Expert report, but none with more than that.

Miss Serious is one of those, and she is also on a mark that is three pounds lower than for her last victory. If she can rediscover some form (and stay upright) at a course that her trainer has a very good long-term record at, then she could be on a dangerous mark.

Horses For Courses is the report that is available to all registered users on a Friday, and it shows what a good record Miss Serious has here at Newton Abbot. From the six races she has had here, she has won three of them and been placed in five, for level stakes profit of 9.75 and 14.54 respectively. If a return to Newton Abbot can bring out the best in her, then she has a chance as she won here over this distance and from the same mark, in 2016.