Sometimes it’s just staring you in the face. A little bit of digging is often all it takes to turn a notion into a profitable punting angle, and today I offer you three: something old, something new, and something ‘upcycled’.

I had a bit of time off for good(ish) behaviour yesterday and, of course, I spent it wisely, watching moderate racing from three summer jumps meetings… Whilst viewing, in an unusually quiet Casa Bisogno, two profit-pulling angles came to mind. The first relates, as the heading suggests, to Irish raiders on English shores; the second follows in the ensuing section.

Honestly, this is so remarkably simple that it really shouldn’t be so effective. But it is.

As I noticed the line of blue yesterday morning for an Irish horse with no form called Scripturient, I thought, “I’ve seen this film before” and backed it blindly – a whole tenner – at 6/1. A few hours later Gavin Cromwell’s shipper was doing for the English cavaliers in a style reminiscent of his presumed forefather, Oliver. Scripturient won, as he pleased, at 5/2.

Right, said I, with rare time to mull, let’s have a look at these no form raiders. Here’s what I discovered…

Backing all Irish runners in UK races that had run in Ireland last time out would have lost about 15% of stakes, at starting price. That’s already remarkable given how many of them truncate markedly in price; and I conjecture that taking an early price, Best Odds Guaranteed, would likely cover that negative equity at SP.

But it makes sense that those which win are fancied to run well: after all, it’s a fair old way to travel, across the deep, just for the weather (even if it is better here 😉 ). Setting the odds bar at 20/1 is pretty liberal, but it serves to throw out a whole load of bathwater and not too much baby, if you catch my drift.

Incredibly, we are now at less than 5% losses at starting price, on a sample of over 3100 runners since 2008. At starting price! The returns at Betfair Starting Price (BSP) are around 200 points. At early BOG prices, yield is surely higher.

Thus, having watched another Irish-trained summer jumper bolt up in Britain, I expected that this would be the pattern; but, in fact, that wasn’t the case. The Irish National Hunt raiders did fare better in the summer than the rest of the year (excluding March, skewed by Ireland’s ongoing domination of Cheltenham Festival handicaps from a punting perspective), but not in a manner that your bank manager (or, more likely, your peer group) would approve.

No, it’s the flat horses which are most consistently bankable.

An ROI of almost 30% at starting price on a sample which cannot be skewed by a couple of massive priced outsiders due to the 20/1 cutoff is faintly ridiculous. At BSP or early BOG prices, you can add another hundred points or more to that bottom line. And betting early it is easy enough to move the negligible all weather deficit into the profit column, so I’d be happy to punt those as well.

Here’s how this looks, then:

– UK flat (turf or all weather) handicaps
– Trained in Ireland, and ran in Ireland last time out
– 20/1 or shorter

Focus on the flat with Irish handicap raiders

The logic supports the ledger: most materially it is a long (expensive) journey for a runner without a chance; but also plenty of Irish trainers travel in search of better ground and/or easier opportunities. The volume of racing in Britain, allied to the relative ability level of much of it, facilitates these ambushes.

Here is the yearly breakdown: 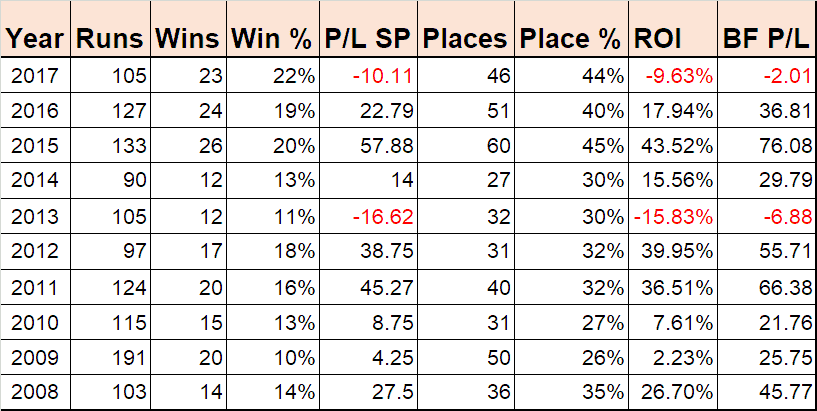 It’s a solid and consistent view. It is of course worth pointing out that 2017 has seen a higher win (and place) percentage than previously, but a negative ROI. Whilst there is almost certainly an element of the market finally cottoning on, it should continue to be the case that the early markets afford enough latitude to accommodate this differential. Time will tell on that score…

For what it’s worth – don’t judge the approach on this, whether results are good or bad – today’s quartet of qualifiers are:

For Gold subscribers, I’ve started a forum thread to highlight these for a while…

A Brand New Trainer Heading For The Top?

If the Irish raiders system above is something old, how about something new?

Regular readers will know of my keenness to follow trainers, and specifically to understand in which micro-climates they deliberately set out to shine. I’m always looking out for new trainers who might be profitable to follow before the herd catch up.

The latest name to note in that sphere is 26-year-old Olly Murphy. Murphy is the son of trainer Anabel and bloodstock agent Aiden, and was assistant trainer to Gordon Elliott for four years. He has, then, a peerless schooling for one of such relative youth.

Of course, be that as it may, the proof of the pudding is always in the eating.

Since Murphy Jr. obtained his license he has saddled ten runners. Eight of them have finished first or second; four of them have won, and it should have been five but for an ultra-rare misjudged ride by the champion jockey aboard Varene De Vauzelle yesterday, foiling a treble for the trainer (and, naturally, the only win wager I struck on the three).

Olly Murphy has made a blistering start to his training career

If the likes of Harry Fry and Ben Pauling – both young assistants to champion trainers before going solo – are any blueprint, the market will very quickly react to Olly’s runners in low grade events. However, they may retain a blind spot in better class heats and/or when Murphy’s team face up against more established trainers.

One thing is for sure: this is a team worth noting with anything they run right now.

One other thing: Olly bought a certain The Geegeez Geegee at the sales recently and it will be interesting to see what he can do with our former inmate.

Oh, and one other other thing: OM runs Sevilla in the 7.10 Wolverhampton tonight.

‘Upcycling’ Race of the Day

Something old, something new, something borrowed… or in this case, something re-imagined. Steve Oliver has been posting his Race of the Day for bang on a year now, and in that time it has helped many a newcomer – and plenty of more established visitors – get to grips with some of the tools, views and reports available on site.

It was never intended to be a tipping piece, and as such never picked out a singular horse. Rather, the idea was to showcase the info available and help readers to think about how to deploy the data.

In truth, with Race of the Day v2.0 – which makes its debut today – little has changed. But I have offered Steve the latitude to lead with a particular horse, and to reveal more of the toolkit in making a case for his spotlighted beast.

The purpose of Race of the Day is still to illustrate what can be gleaned about a race, and it will remain in the free part of the site. It is not strictly intended as a tipping piece and we will not keep score. Again, the primary purpose is ‘edutainment’ (if you’ll pardon such a BS Bingo word).

Feel free to read Race of the Day, to back the highlighted horse, to back something else that stands out in the tools, or to ignore completely. But please do understand its main objective.

Race of the Day can be found here daily.

p.p.s. Don’t forget Stat of the Day, our premium tipping service, is free to all on Mondays, and can be found here.

p.p.p.s. Prefer some Monday editorial? Tony Stafford’s Monday Musings are here, and Nigel Keeling’s weekend round up is here.

Monday Musings: Emerging into the uplands once more Stat of the Day, 18th July 2017
Scroll to top