The Trainer Snippets report shows that John Butler has a particularly good record with his runners when they are coming back from a break (60+ days). He has a one in six strike rate with an Impact Value of 1.74, meaning he is not far off twice as likely to get a winner as average. He is showing huge level stakes profits, however, this is uplifted by a massive 80/1 winner at Chelmsford last winter. If we strip that winner out of the results, it is still a healthy P/L and Red Invader warrants a closer look.

If we drill down into Butler’s overall form, we can see that it looks great (bearing in mind for 80/1 winner). His recent form is useful with five winners over the past month and he has an encouraging record here at Lingfield for the past year. From the 37 runners he’s sent here, he’s had eight winners (21.62%) and ten places (27.03%) for level stakes profits of 32.25 and 20.42 respectively.

From the race card we can see that Red Invader’s recent form is very up and down, however, when he gets favourable conditions he usually runs well. Last time out he was tried on the turf at Beverley and put in a miserable performance, but prior to that he won with a bit in hand over course and distance. He is now four pounds higher than for that win, but is far better off at the weights than with Roy’s Legacy who was second that day.

As this is a five furlong dash the Speed Ratings are of particular significance (see the Geegeez forum thread Max Rating, Min Trip), and Red Invader comes out on top with a mark of 62. 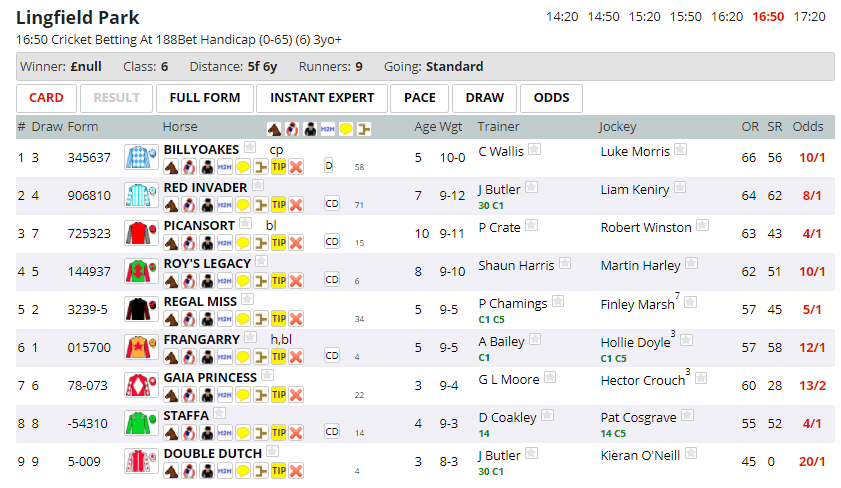 Early leaders over this distance have an excellent record, with over 27% of them winning for a level stakes profit of 488.30.

The tricky aspect of this race is that there doesn’t appear to be a real front runner, which could lead to a falsely run race. Red Invader is not a very fast starter so a lack of early pace would not be a bad thing for him, and he is certain to be staying on as strongly as anything in the field given he has raced plenty of times over six furlongs. 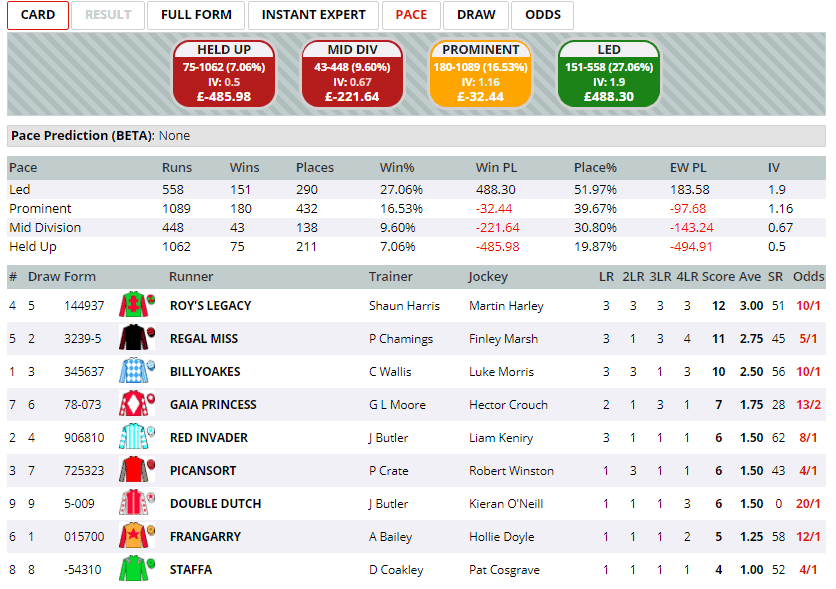 The draw doesn’t show a huge bias, although it appears to be a slight advantage to be towards the centre, but with a reasonably small field it is not something I will be paying too much attention to.

This is quite a poor race which won’t take a lot of winning, and I think the price of 8/1 on Red Invader is based on his overall form rather than his form over course and distance. Added to this is the form of his trainer, especially with horses coming off a break, so I think this is a value play.