Excel Again makes it onto The Shortlist with a useful score of 9, having three sections of green. This Exceed And Excel cost hasn’t raced here at Wolverhampton previously, however, he has twice won on the all weather at Newcastle so I am not expecting any problems with this surface.

He has also never raced over this distance before. He was a nice winner last time out over a mile and was staying on strongly at the finish, so the extra furlong in this may actually bring out further improvement in this decent looking three-year-old.

If we take a look at the Full Form filter we can see that all of his five runs to date have been over a mile. If you hover the cursor over the race outcome for each race, it will give you a short description of how he ran. In four out of these five races, he was finishing strongly, adding further weight to the extra distance here today being a positive.

He has been extremely consistent, winning twice and being placed in four out of his five runs, so although he has been raised six pounds for his recent win at Newcastle, there looks plenty more to come from him and I don’t think the extra weight will pose too many problems.

The Instant Expert report highlights how well Excel Again is suited by today’s conditions, and it also shows that the rest of the field isn’t. There are a few sporadic sections of green for the rest of them, but not too much to get excited about.

It is interesting to note, that like Excel Again, quite a few of the field are a few pounds higher than for their last victory.

A lot of this field like to race prominently, but there doesn’t appear to be any out and out front runner in the race, so it is tricky to tell exactly where the pace is going to come from.

Count Montecristo looks the most likely as he has the highest pace score based on the last four races of each horse, and I am hoping he sets quite a decent pace as this will play into the hands of Excel Again, with his stamina in the finish likely to play a big part. 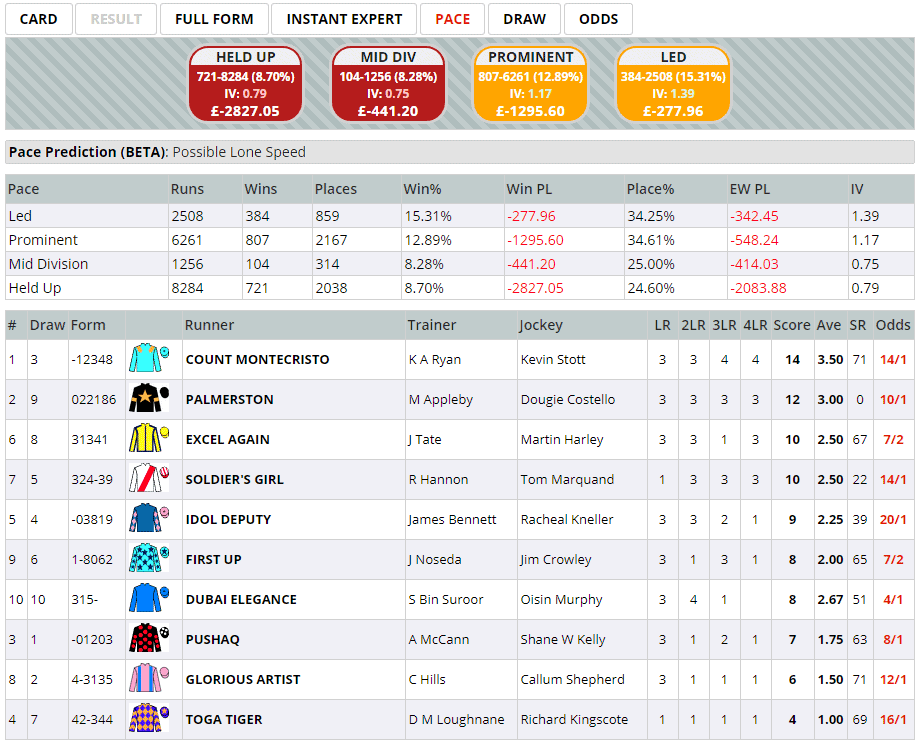 Excel Again looks a very solid option at around 7/2, as I am sure the step up in trip will see him in an even better light, and I think he will have too much class for his rivals.