When looking at the Trainer Snippets report we can see that David Simcock has an impressive record with Last Time Out winners, having a strike rate of a little better than one in four. This has produced a level stakes profit of 26.17 from 145 runners, and an Impact Value of 1.37. He runs Soul Silver at Goodwood today, and she is worth a closer look.

If we take a look at her most recent form we can see that her best performances have been when there has been some cut in the ground, or in the case of her run on the all-weather, when that has been riding slower than standard. She was a good winner over a mile at Newbury last time out in a handicap that was slightly better (on paper) than this one. She was never involved in a Listed race at Sandown on much firmer ground and prior to that she stayed on very strongly but couldn’t trouble the leaders in another Listed race at Newbury.

This is a class below some of the races she has been competing in, and although she has been raised four pounds for her latest victory, I don’t think that will inconvenience her too much.

Early leaders, or those that race prominently, appear to have a distinct advantage over this distance, as it can be quite tough to come from behind at times here at Goodwood.

Lincoln Rocks and Darkroom Angel are confirmed front runners, and being drawn in stalls one and three, it looks as though the early pace will be among the low numbers. In fact, the next highest pace scores are for Ghadaayer and Shenanigans, who are drawn five and two, so all of the apparent early pace is on the low side of the draw.

Soul Silver it at her most dangerous when she rides up with the pace, as if she is behind early she struggles to get into the race. Being drawn in stall four will hopefully help her in this respect, as she is on the side where all of the likely early pace will be. If she can follow them through the first few furlongs and get a useful position, then I am hopeful that Oisin Murphy with be able to strike inside the final quarter of a mile. 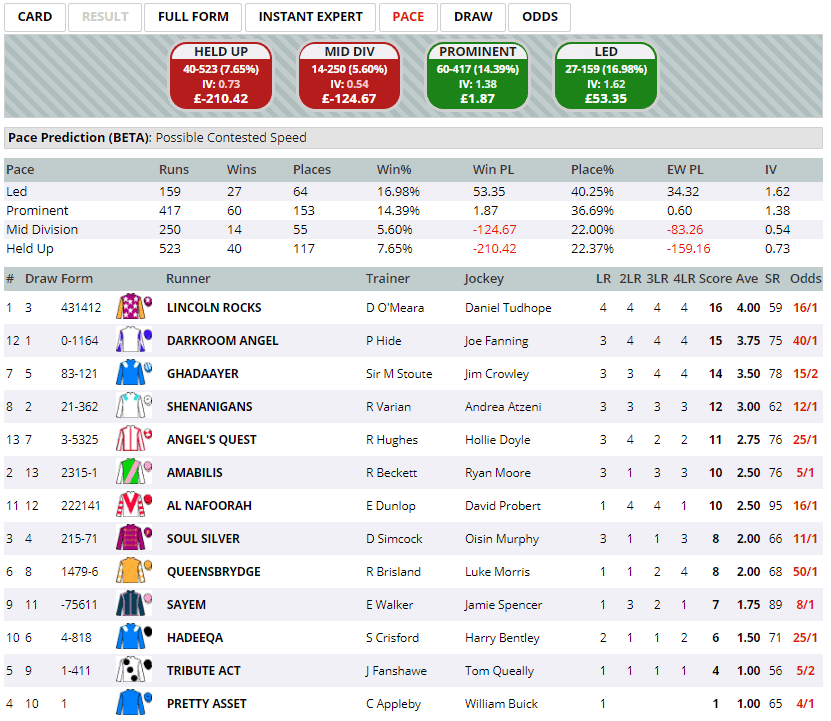 For a horse that seems suited to today’s conditions, and has form at this level, I think Soul Silver is overpriced at 11/1. Added to that is her trainers extremely good record with last time out winners, I am hopeful that she will provide a good run for our money.