In what has become a regular staple of the blog in recent years, I share my wager for the 2017/18 football season that is now upon us. Last year was exceptional, with the bet ‘copping’ on all lines. This year will doubtless be less successful, but we mustn’t allow that to dampen the enthusiasm too much.

A quick recap, then, of last season’s guesswork, the blueprint for which can be found here.

It would be very difficult to replicate that, impossible to top it.

The bet was £50 perm trixie (£350), and the return was £3,770. I know a number of readers followed me in for varying stakes and returned around eleven times their cumulative investment. Which was nice. 🙂

Here’s my ticket from last year: 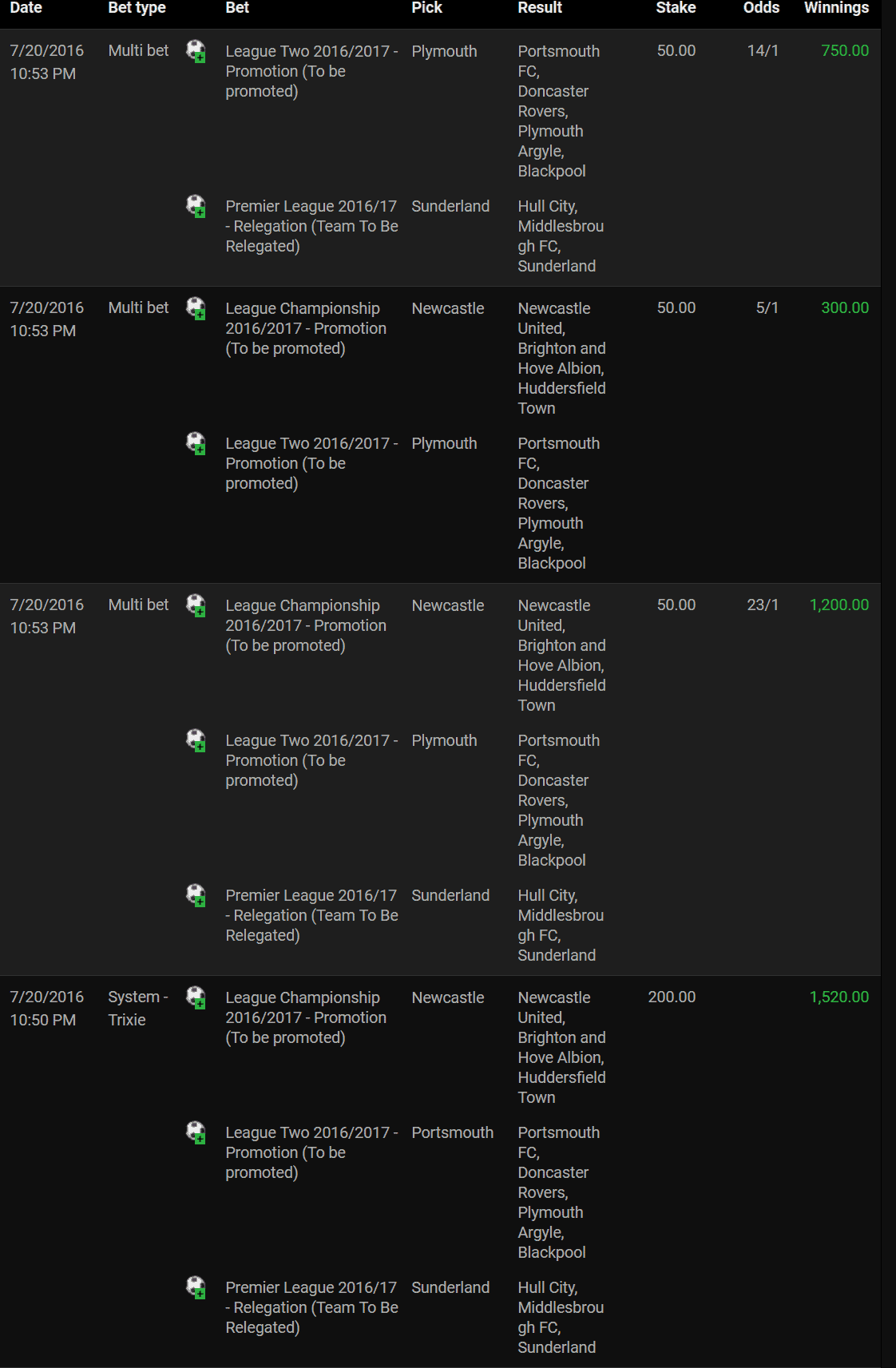 I should quickly add there was another, supplementary, bet. I had a double on Newcastle top/Hull bottom at 10.5/1. But for the talent of Marco Silva and the commensurate ineptitude of David Moyes that might have scored as well.

In 2015/16, I used that same perm trixie format – a team for Premier League relegation, one for Championship promotion, and one or both of two for League Two promotion – to net a double which essentially covered stakes. Last year, we scooped the lot, so what of this season?

Well, my bet has been placed: a £50 perm trixie exactly as per the above blueprint. The teams?

I’ve taken Watford for Premier League relegation. They were outrageously poor towards the end of last season with the discontent with manager Materazzi scarcely masked (he was subjected to ‘Off! Off! Off!’ chants from his own fans when the referee came to speak to him on the touchline).

True, they now have the excellent thus far Marco Silva in the chair. But for how long? The Vicarage Road owners are notoriously transient with their managers and a poor start could see a short tenure. But it is the playing staff which justifies the bet – allied to the available odds, natch. Deeney is the talisman, a largely non-scoring striker these days. Around him has been assembled a shoulder-shrugging league of nations, short enough on talent while long enough on pout potential.

Chalobah is a solid acquisition in the middle of the park, and doubtless there will be further ins and outs before the end of the month; but in a division which has generally only seen one of the promoted clubs relegated (though two last season) in recent campaigns, I reckon around 2/1 is pretty fair.

In the Championship, I’ve opted for Middlesbrough. A very good manager in Garry Monk has inherited a squad that would have stayed up last term if they’d scored more goals. Defensively solid, they have added firepower aplenty with the likes of Ashley Fletcher, Rudy Gestede and Britt Assombalonga joining Patrick Bamford up top.

They lost their first game of the season, 1-0 away at Wolves; but then, Newcastle lost 1-0 away at Fulham last season and it didn’t stop them winning the league. Boro have drifted out from 15/8 to 9/4, a typically silly early season over-reaction.

And, as ever, I’ve taken two in League Two, where there are three automatic promotion spots up for grabs and seventh place still makes the playoffs. Plenty to retain interest, then, and Luton head my two-pronged assault. A solid side who appear to be growing back into life in League Two, they’ve strengthened from last season. Although it would be careless to infer too much from an opening day thumping of a weak Yeovil outfit, 8-2 is a scoreline lacking in ambiguity.

A loss last night in the EFL Cup may be seen as a bonus in the context of less games to play, and they’ve now truncated from 7/5 or thereabouts to a top quote of even money.

The more speculative play in League Two is Lincoln. Excellent last season in the Conference – they were a point off a century, and won seven of their last nine despite a fixture backlog – they also reached the quarter-finals of the FA Cup… as a non-League side, beating Burnley, Brighton and Ipswich along the way. Loan signings were a feature of last season’s heroics, some of which have now signed permanently for the club, and they’ve again worked well in that arena, bringing in promising youngsters from Burnley, Reading and Brighton. The signing of Matt Green catches the eye: he’s an old head with a goalscoring pedigree.

Lincoln are out to 10/3 with Victor having been 11/4 when I played on Friday last week, as a result of a decent (I thought) draw away at Wycombe. They too exited the EFL Cup last night. Good news.

I actually took the time/trouble to mix and match my bets around the top prices rather than place the whole bet with a single bookmaker. That’s a good strategy though redundant if at least a double is not forthcoming. My bet looks like this: 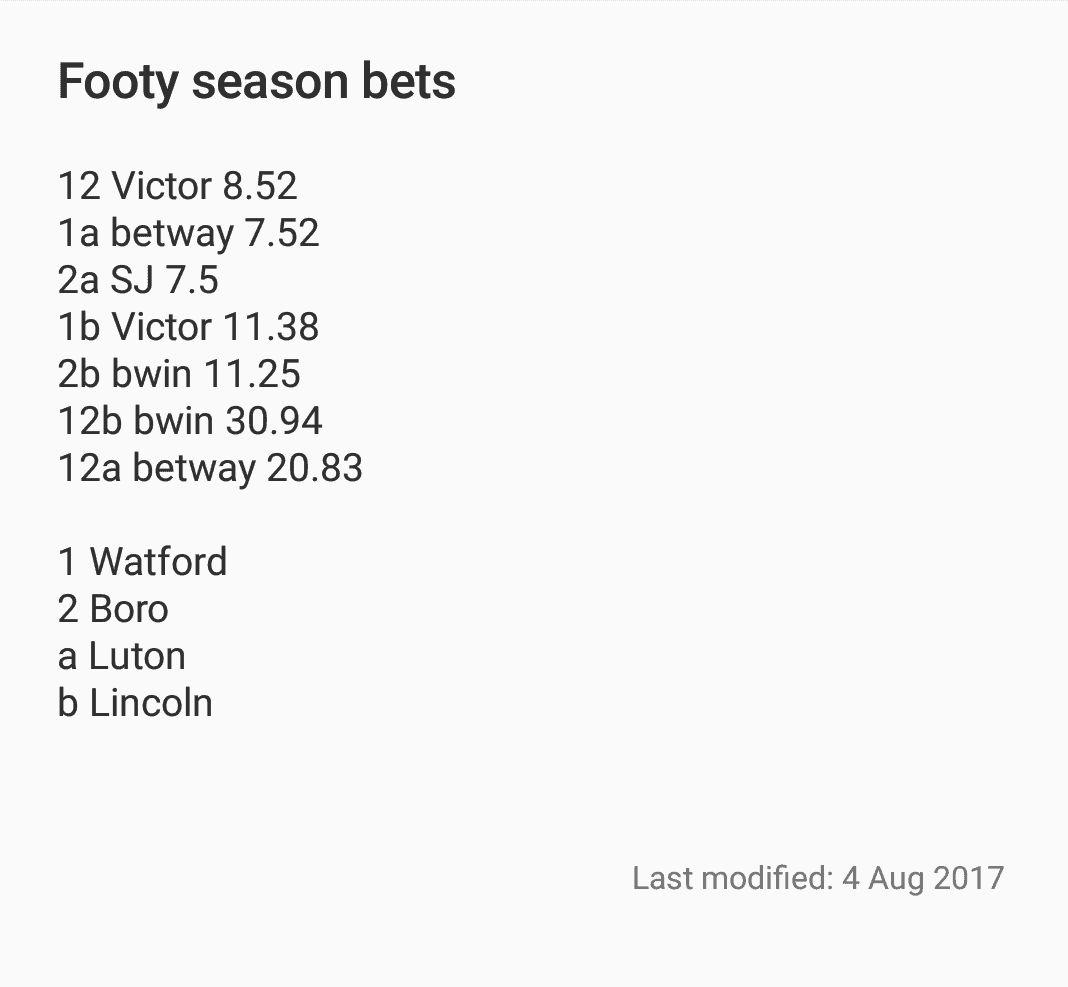 If you’ve entered in previous years, and you’ve got a team in the official FFL game, you’ll be automatically entered into the league – do check though.

Here’s how to join in

Create your team, then…

Go to https://fantasy.premierleague.com/a/leagues/join/private and enter this code:

That should be you registered as part of the league. And there’s a prize!

The winner will receive the indescribable kudos of being the Geegeez Super Leagu champion. Oh, and an annual Gold subscription, worth £297. Whoop!

So geet yourself entered today – remember, the season starts this FRIDAY EVENING, not Saturday lunchtime as usual.