The Trainer Jockey Combo Stats report is excellent for highlighting trainer and jockey combinations that are either in great current form or have a particularly good record at certain courses.

Kevin Ryan and Kevin Stott are currently going through a bit of a purple patch as over the past two weeks they’ve had four winners (26.67%) and six places (40.00%) from 15 runners, for level stakes profits of 19.50 and 19.08 respectively. The Impact Value is 2.40 meaning they are almost two and a half times as likely than average to have the winner.

They team up with just the one runners today, Hey Jonesy in the first race at York.

If we look at the trainer and jockey form on the racecard, we can see that they are both enjoying a good spell. Kevin Ryan has a 23% strike over the last month with his runners and this has produced an Impact Value of 2.11

Hey, Jonesy has only had the two runs to date, finishing second at Carlisle and then winning well at York in July. That was on good to soft ground (similar to what he will encounter here today) and the second and third in that race have come out and won since.

This is a big step up in class for him as he is racing against horses like De Bruyne Horse and Great Prospector who have Group race experience, however, he looks a very fine prospect himself.

Early leaders here over this distance have a fine record, with 18.40% of them going on to win the race for a level stakes profit of 141.11.

In such a big field getting a handy position may prove crucial, and Hey Jonesy has been quickly away in both of his races. He actually led the whole way in his win last time out (which was the first time that Kevin Stott rode him) and I expect a similar ride here today.

He will have classier horses in behind looking to pass him inside the final furlong, but I am hoping he has enough about him to be able to hold them all off. 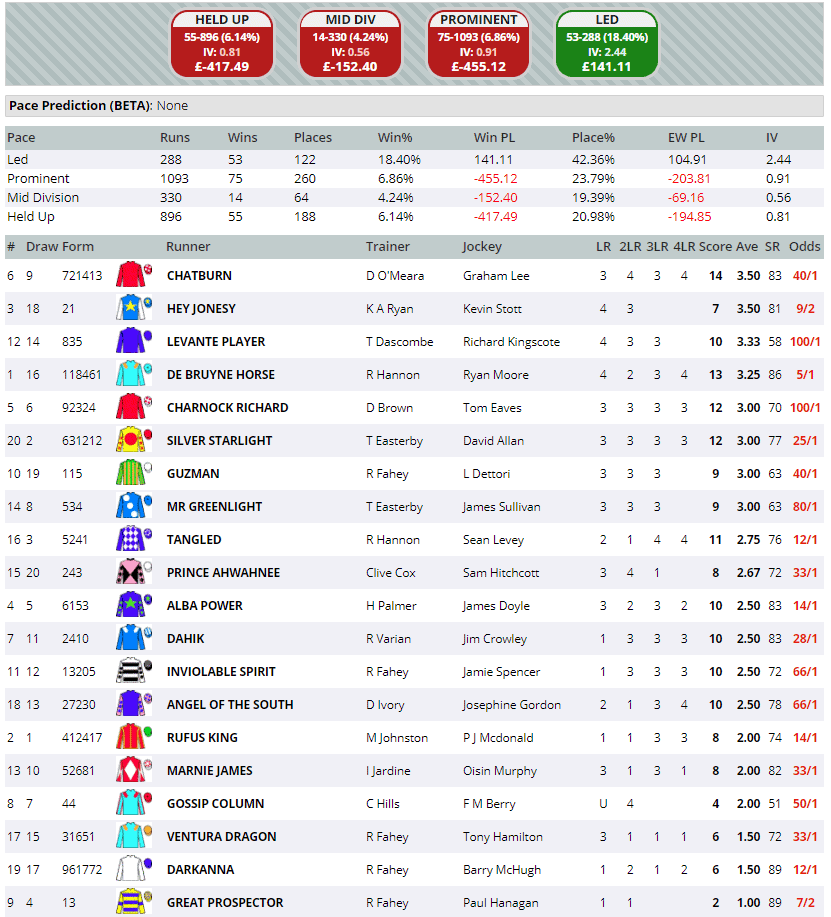