The Trainer Jockey Combo Stats report shows that William Haggas and Pat Cosgrave have a wonderful record together at Lingfield over the past year. From 20 runners they’ve had nine winners (45%) and 13 places (65%) for level stakes profits of 19.06 and 21.31 respectively. This has produced an Impact Value of 3.77, meaning they are almost four times more likely than average to have the winner.

They team up in two races at Lingfield today it is One For June that I am going to be concentrating on.

One For June has been well beaten in her last two outings, however, they were both strong races and the ground was probably too soft for her.

She was a facile winner over course and distance in July and I think a return to firmer ground will be in her favour. That race didn’t appear to look particularly strong but the third has come out and won at Windsor subsequently, so it may not have been as bad as it seemed.

By taking a look at the trainer form on the racecard we can see that Haggas has been among the winners recently, and he also has an excellent long-term record here at Lingfield. Over the past five years, he has a strike rate of over 30%, but he has improved that further in recent times.

There isn’t too much to get excited about on the Instant Expert report as this is a race for two-year-olds so they don’t have a lot of form.

One For June does come out the best though with three sections of green and the previous course win in a nice plus in my opinion.

Early leaders here over this distance have a brilliant record, with 29.11% of them winning the race for a level stakes profit of 220.19.

One For June has been quickly away from the stalls in the past and she lead from start to finish here previously. James Doyle was the jockey that day but I wouldn’t be surprised to see Pat Cosgrave try and adopt similar tactics here today. 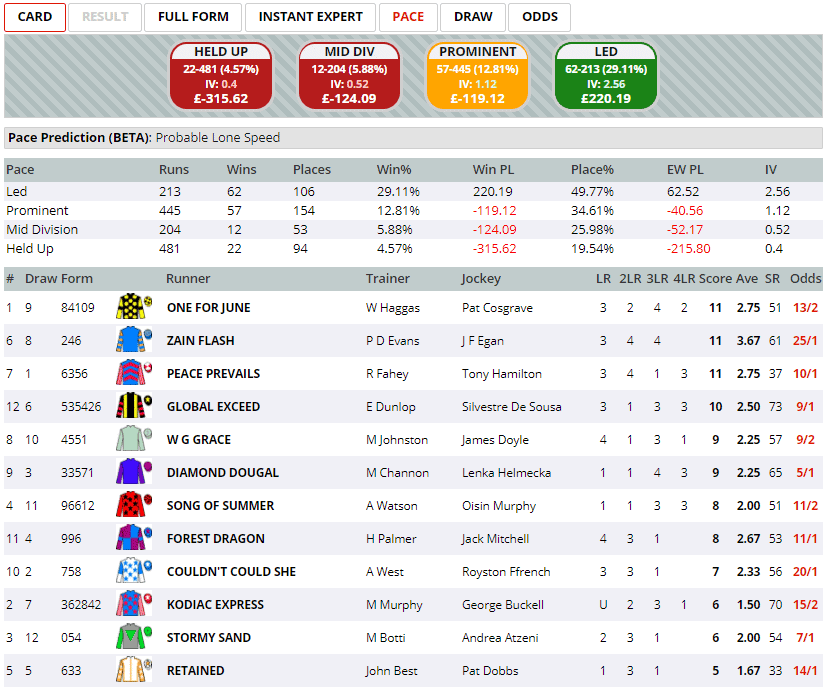