Marmajuke Bay makes it onto The Shortlist for today with a decent score of 11, having three sections of green and two of amber. He looks an interesting contender in what looks a very open race, and he’s a nice price currently at around 12/1.

The current form of Marmajuke Bay has been good, and it was only when he was upped in distance to 14 furlongs that he appeared to struggle (although that was with an extra four pounds to carry as well. He was a fine winner over course and distance in July and is just the three pounds higher today. He appears to relish racing on good to soft ground, having won twice before on this going (both here at Haydock) and although this looks a slightly better race than the previous win here, he looks to have a chance of being involved.

Steve Drowne takes the ride again today and he appears to like racing here at Haydock. Over the past year, he’s had three winners from ten runners which have produced a level stakes profit of 20.50 and an Impact Value of 2.63.

The Instant Expert report highlights how well suited Marmajuke Bay is to today’s conditions, however, it should be noted that Agent Murphy also comes out relatively well here. He has three sections of green and one of amber but hasn’t raced here at Haydock before. He is seven pounds lower than for his last win, so if a return to favourable conditions brings the best out of him, he could be dangerous.

Early leaders here over this distance have a useful record, with 21.11% of them winning the race for a level stakes profit of 65.16.

Marmajuke Bay is usually pretty quickly away and I am hopeful that if Steve Drowne can get him into a good position early on in the race, then he will be good enough to grab at least a place. 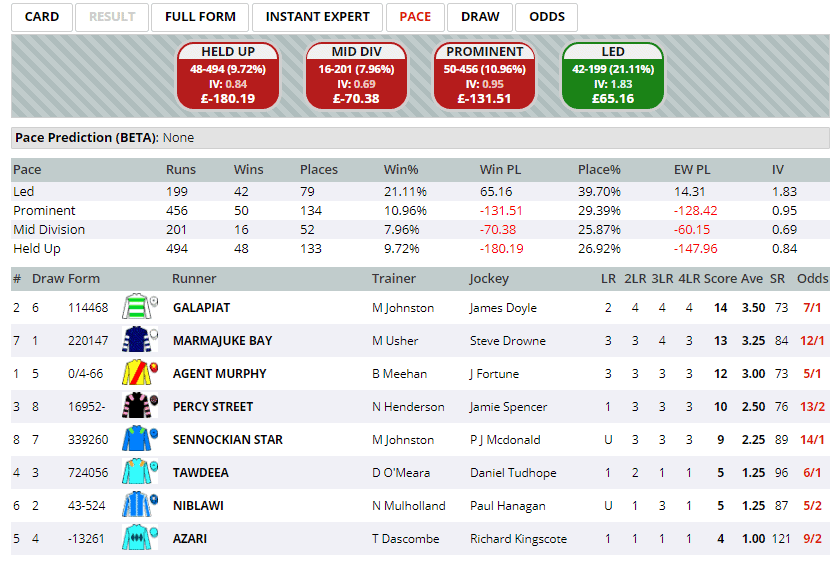 Stat of the Day, 7th September 2017 The King Of Backend Maidens
Scroll to top