From September to the end of the turf flat season, many of the top trainers in the land will be introducing the cream of their Classic aspirant juveniles to the racecourse for the very first time. Plenty of these unraced babies will be given what might be considered educational rides while others will be ready, willing and able to fire first time.

As punters it is our job to recognise this sub-season at the end of the turf campaign, where young horses in particular have been given more time to grow and mature. Of course, as we’ll often be told, they’ll be much better with another winter under their belts; and, in many cases, with another winter after that.

But such is the nature of the British racing and breeding programme, with its thirst for precocious racehorses and its ridiculously antiquated front-loaded Classic sequence (all bar the St Leger are run before the season is nine weeks old).

Thus, those which have been held back until the autumn – the so-called ‘backend’ – have either had training issues, are later developers, or are considered good enough to be given more time.

One trainer stands above all others in this regard, the peerlessly patient John Gosden. An exceptional trainer by any measure, that fact is seldom lost on the market, meaning we punters have to dig and scratch for a route in. Here may be one:

From the start of 2012 until now, Gosden ran 271 juveniles on the turf for the first time in maiden or novice company.

Pretty impressive for such a high profile trainer. But breaking them down into March to August and September to November groups makes for interesting reading:

From less runners there are more winners and more placed horses in those closing weeks of the season. This stands to reason: after all, Gosden didn’t run the likes of Golden Horn or Enable (notwithstanding the latter debuted on the all weather) until late October and late November respectively.

But look at the wagering difference between the two groups: backing the 141 juvenile first-timers up to the end of August would have lost 34 points (a quarter of all stakes) at SP, and most of 24 points at exchange prices. Waiting for the tail end of the season produced a profit of 58 points at starting price (45% ROI) and 80 points at Betfair SP.

It’s a relatively small sample size from which to work, so care is required when drilling down any further. But it is worth looking at the backend runners by month and race distance. 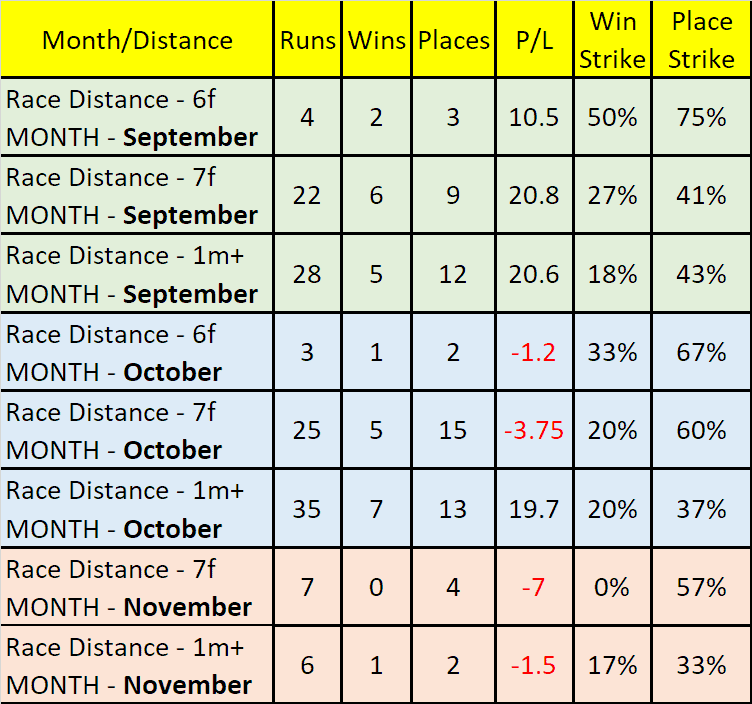 Some interesting patterns start to show themselves now. Firstly, Gosden’s September performance has been exceptional in this context across the board. Although less of the longer distance runners have won, they have more than paid their way.

As we move into October, there seems to be a clear shift in focus towards those expected to need a trip as a three-year-old, something doubtless accentuated by a shift in focus in the programme book: there are more juvenile maidens over longer trips at this time of year. Regardless, more than half of Gosden’s 63 two-year-old debut runners in this month raced over at least a mile. The place strike rates for the shorter distances suggest those runners remain worthy of consideration.

November is a quieter time, and again we may be better served looking at the 46% place rate than the 8% win rate here. Or ignoring the tiny sample completely. The key point here is that this is Johnny G season. Backing his two-year-old debut starters on the turf has proved consistently profitable.

The key point here is that this is Johnny G season. Backing his two-year-old debut maiden and novice starters on the turf has proved consistently profitable.

Gosden has been consistently profitable to follow with backend juveniles

As can be seen, we haven’t missed anything this year yet: just two fourth places at Sandown. Without suggesting following the approach blindly, it is certainly an angle to be aware of, and to deploy as you see fit.

p.s. A good way to follow John Gosden, or any trainer, is to add them to your Geegeez Tracker. Register here, if you haven’t already, then click the star icon next to the trainer’s name on our racecards, or search for them from the Tracker itself.