The Trainer Jockey Combo Stats report shows what an excellent record David O’Meara and Daniel Tudhope have together when racing at Redcar. Over the past five years, they have had 19 winners (22.35%) and 41 places (48.24%) from 85 runners, for level stakes profits of 23.63 and 31.18 respectively. This has also produced an Impact Value of 2.37, meaning they are almost two and a half times more likely than average to have a winner.

They have four runners here at Redcar today, but it is Summerghand that I am going to be concentrating on.

Summerghand has been in pretty good form this summer with two wins and a second place in his last five outings. Soft going appears to be to his liking which is a positive and he is just three pounds higher than for his last win. As a lightly raced three-year-old I would be hopeful of further improvement and if he can find it he will be tough to beat in this.

By expanding the jockey form on the racecard we can see that Daniel Tudhope has been banging out winner after winning during the last month. From 61 runners he’s had 15 winners (24.69%) and 29 places (47.54%) for level stakes profits of 18.41 and 22.87 respectively. He also had an impressive long-term record here at Redcar.

The Instant Expert doesn’t have a lot of green sections on it but Summerghand comes out really well, with four sections of green and one of grey, not having run here at Redcar before. This shows how well suited he is to today’s conditions, and only one other runner has more than one section of green.

The Pace report shows that early leaders here over this distance have the best record, with 16.18 of them winning the race, for a level stakes profit of 99.44.

There doesn’t appear to be a real front-runner in the field, with a few of the runners generally being prominent in their races. Summerghand is one of them and I am hoping that from stall 11 Tudhope will be able to get out and get a decent position early on. 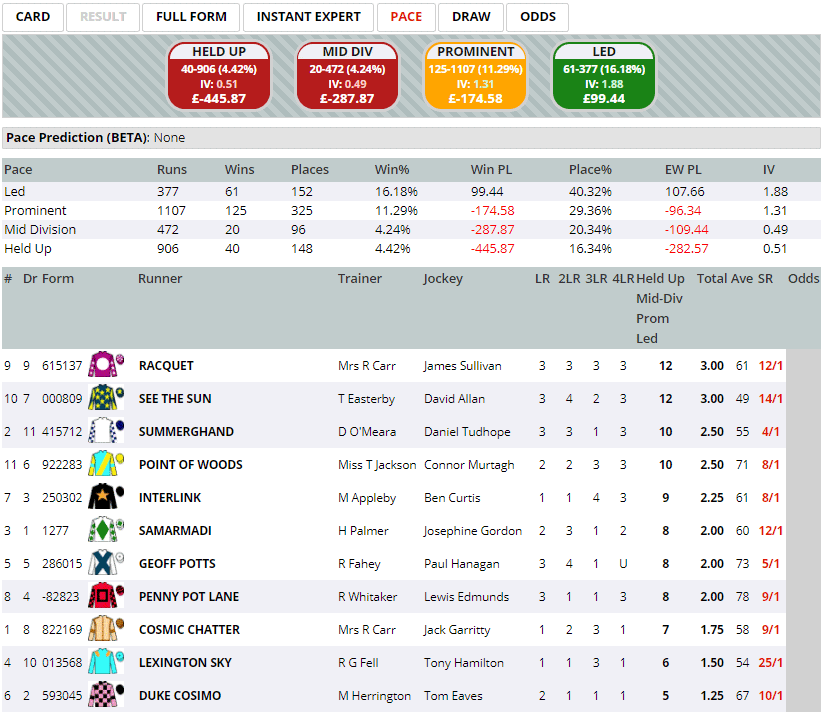