She runs Avenue Des Champ in a 14-furlong handicap at Chelmsford this evening.

The current form of Avenue Des Champs is a bit up and down, however, the last time he ran over 14 furlongs he won the race and he is just a pound higher in the weights today. It should be noted that was on turf at Yarmouth, but he has won here at Chelmsford previously so we know he acts well on this surface.

The useful Martin Harley rides him for the first time today and he has quite a reasonable record when riding at this course.

Avenue Des Champs comes out well when looking at the Instant Expert report with three sections of green and two of amber. He is one of just three course and distance winners and is five pounds higher than for his last win on the all-weather surfaces.

Aumerle is an interesting runner when looking at this report, as he has three sections of green and one of amber, but is a full nine pounds lower than for his last victory. Therefore, with conditions in his favour, he could run well also at a nice price.

Leaders and prominent runners have the best record here over this distance, as can be seen by taking a look at the Pace report. Chelmsford is known as a difficult course to pass runners so it often pays to looks for runners that are at least look like they may be racing prominently.

Avenue Des Champs has one of the highest pace scores in this race and has been tried over two miles on a couple of occasions recently, therefore, his stamina over this distance should be good and if Harley is able to dictate the pace of the race to a certain extent then he may be hard to pass in the home straight. 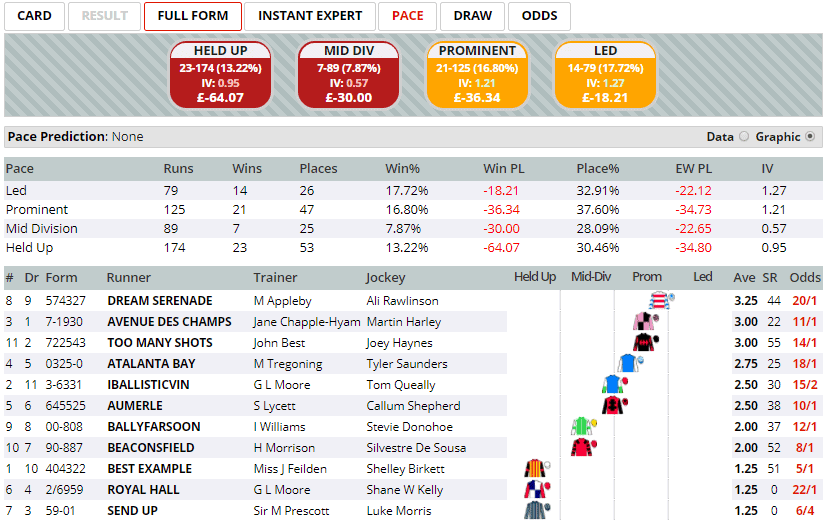 At the current price of around 11/1, I think Avenue Des Champs looks a good play as I fancy his chances to grab at least a place in what is an open-looking race.