He runs Viceroy Mac at Lingfield today over a mile so it fits the profile.

Viceroy Mac has had the four runs so far as a two-year-old and has had a solid if unspectacular start to his career.

He stepped up in trip to seven furlongs last time out and was staying on well at the end of the race, therefore, another furlong here today looks sure to suit and his breeding appears to suggest similar as well.

Another interesting aspect from the sire snippets is the increase in the strike rate of Sepoy’s (Viceroy’s sire) runners when on the all-weather courses. It is over 2.5% higher for the artificial tracks so there is hope that switching to the polytrack at Lingfield will bring out improvement in him.

If we take a look at the trainer form from the racecard we can see that as well as having a good record with middle distance runners, Loughnane has enjoyed coming to Lingfield recently. Over the past year, he’s had just the eight runners, but three of them have won and five have been placed. A much larger sample of 119 runners over the last five years still sees a strike rate of 18.49% (over 8% higher than his overall strike rate), and an Impact Value of 1.54.

Early leaders here over this distance have a good record with a strike rate of just over one in five, for a level stakes profit of 257.25.

Viceroy Mac has been held up in her races so far but I do wonder if this time Gordon will keep him a little closer to the pace. He is drawn next to the likely early leader Simply Breathless, and it wouldn’t surprise me to see Gordon keep close to Kirby if he gets away quickly. 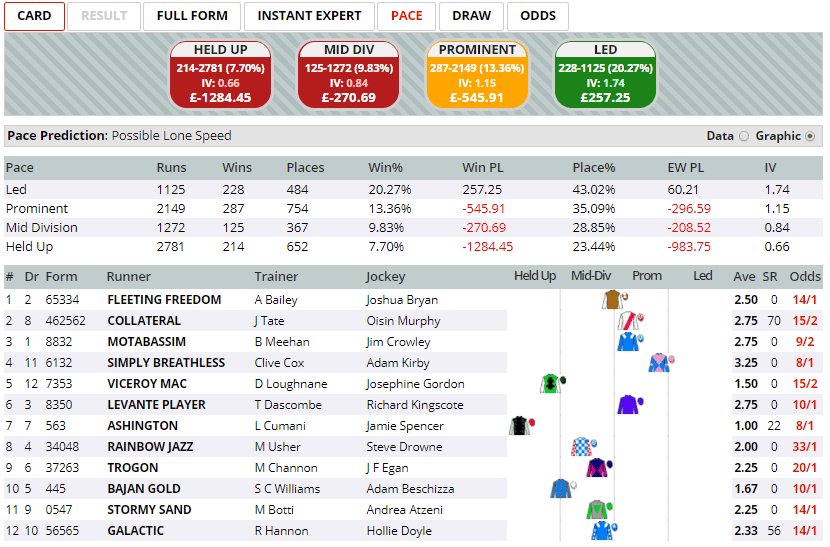