When looking at the Trainer Jockey Combo Stats report we can see that Kevin Ryan and Tom Eaves have been in excellent form when teaming up together over the past month. From 20 runners they’ve had five winners (25%) and eight places (40%) for level stakes profits of 24.91 and 27.29 respectively. This has also produced an Impact Value of 2.48, meaning they are almost two and a half times as likely as average to have the winner.

They have two runners together at Newcastle today and it is Foxy Lady that I am going to be taking a closer look at.

This is a nursery handicap and Foxy Lady has had five runs in her career to date, with a second place over course and distance last time out the pick of them. The leading pair were well clear of the rest of the field that day, and although she has been raised five pounds for that performance, if she has progressed again she must have a chance in this.

The switch to the artificial surface appeared to suit and it is worth noting that her sire, Foxwedge, has an improved strike rate with runners on the all weather.

The Pace tab shows that prominent runners and horses that are help up have the best records here, however, there isn’t a great deal to choose between the four different styles so it doesn’t appear to be a great advantage.

It is also really tricky to ascertain where the pace is going to come from. Contribute has the highest pace score so looks the most likely to be the early leaders, but after that, a lot of the field have raced in mid-division their races so far. 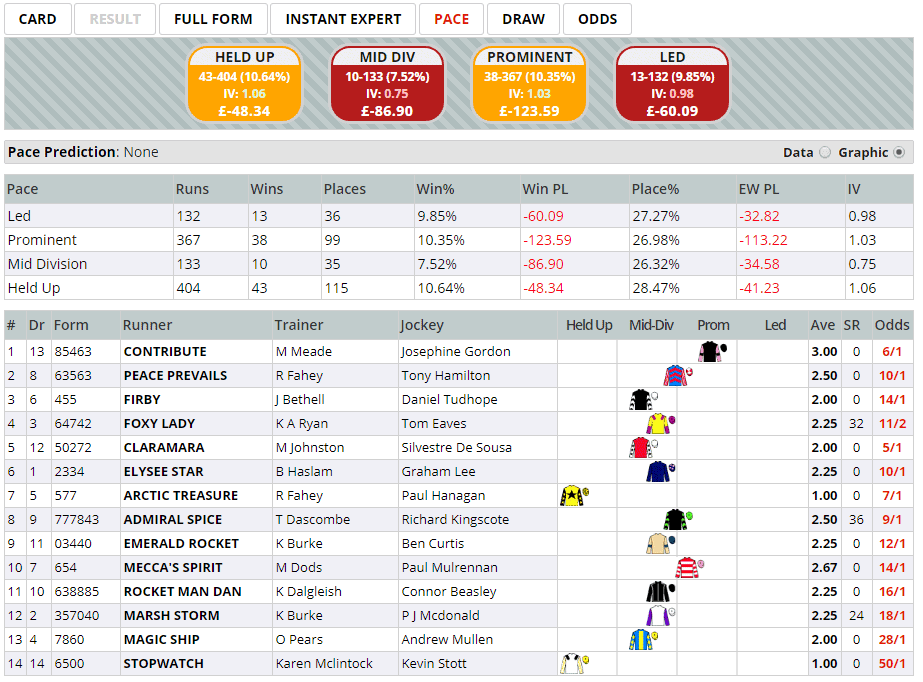