Joyful Dream fits that profile today, having her first run for 180 days and also her first since switching to this yard.

Taking a look back at her form for the past 15 month shows that she has been racing mainly over six and seven furlongs. Her last race over a mile saw an encouraging third place from a mark that was seven pounds higher than today’s.

It is interesting that her first run for the new yard sees her step up in trip to nine furlongs, a distance that she would be expected to be capable over from a look at her breeding.

The Trainer Snippets on the racecard show that John Butler has a useful record here at Wolverhampton over the past year.

He also does well with horses that are moving in distance from their last race, which we have touched on above, and he shows a healthy level stakes profit with runners he has inherited from other yards.

The Pace report shows that early leaders over this distance and prominent runners have the best record, with Midici Moon looking likely to be one of the early pacesetters.

Joyful Dream is usually around mid-division, but with a change of trainer and distance, it is tricky to have any idea what tactics they will use with her. She is drawn in stall one so has a good spot to be able to get a decent early position if she is able to break away well. 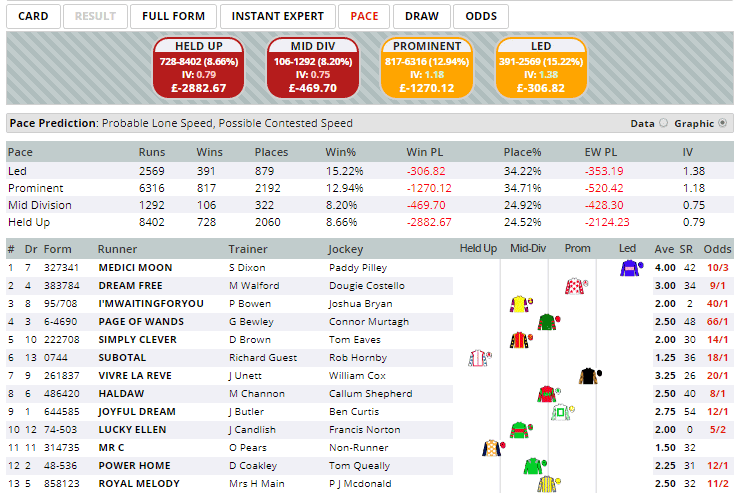