Horses For Courses is the report that is available to all registered users on a Friday, and it shows what an excellent record Rock Warbler has when racing at Newcastle. He has managed four winners (50%) and six places (75%) from eight races, for level stakes profits of 11.50 and 14.48 respectively.

He is attractively priced at around 9/2 in an open looking seven furlongs handicap there tonight.

The current form of Rock Warbler is a little up and down, however, he was a winner over course and distance two races ago before finding a mile at Kempton beyond him last time out. He is clearly at home on the all-weather tracks and Newcastle appears to be his favourite with seven furlongs looking like being his optimum trip now.

Trainer Oliver Greenall has had a couple of winners over the past two weeks and he has an extremely good record here at Newcastle. Over the past year, he’s had six winners (28.57%) and 12 places (57.14%) from 21 runners, for level stakes profits of 11.00 and 15.14 respectively. This has also produced an Impact Value of 2.67, meaning he is more than two and a half times more likely than average to have the winner.

Connor Murtagh takes the ride today and he is able to claim a useful five pounds, which could make all the difference. He has a reasonable record on this course, with three winners (15%) and seven places (35%) from 20 races over the past year, for level stakes profits of 24.50 and 25.39 respectively.

When looking at the Instant Expert report on the ‘place’ setting we can see that Rock Warbler comes out well, with three sections of green and two of amber. He looks nicely suited to conditions here and is also just the three pounds higher than for his last victory (which is completely negated by Murtagh’s five-pound claim). 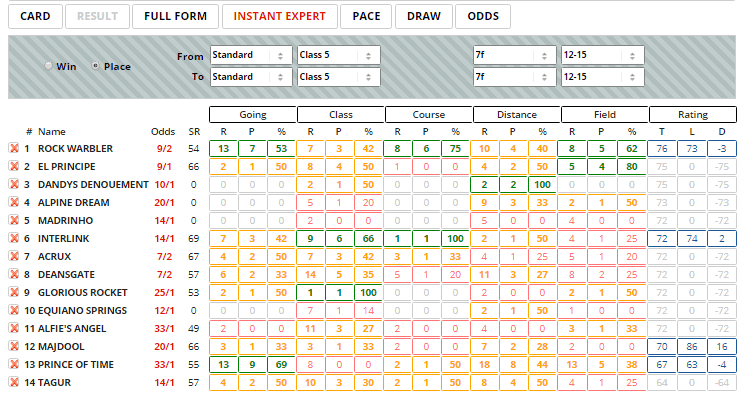 The Pace report shows that there isn’t any real bias when it comes to running styles here over this distance, as early leaders, prominent runners and horses that are held up all have very similar strike rates.

Rock Warbler is usually held up and waited with, and I don’t expect that to be any different here today. 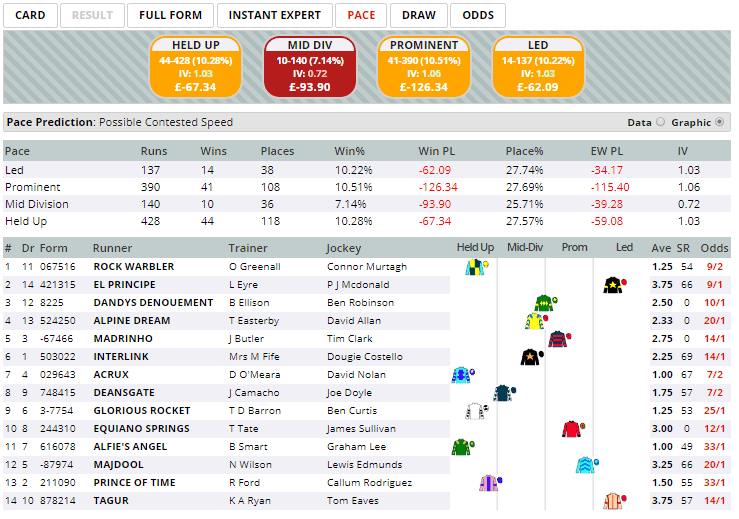