He runs Just A Sting in the first race at Exeter today, a two miles six-furlongs novices’ hurdle.

Just A Sting’s two runs to date were both in bumpers at the start of this year, and he managed to win both of them, with victory last time out coming here at Exeter.

He is a half-brother to The Geegeez Geegee, therefore, the step up in trip on his hurdles debut is likely to suit and I am hoping for a decent run from him today.

When looking at the Trainer Snippets from the racecard we can see what an excellent long-term record Harry Fry has here at Exeter. Over the past five years, he’s had 26 winners (37.14%) and 43 places (61.43%) for level stakes profits of 43.80 and 49.17 respectively. This has also produced an Impact Value of 3.31, meaning he is more than three times more likely than average to have the winner.

He is also fairly useful for getting his horses ready after a break, and with Just A Sting not having raced for 200 days, this could prove crucial.

As this is a novice hurdle there isn’t too much form to see on the Instant Expert report, however, Just A Sting does have three sections of green which is an encouraging sign.

The Pace report shows that early leaders here over this distance have a great record, with 19.67% of them going on to win the race for a level stakes profit of 13.39 and an Impact Value of 2.03.

Based on the runs to date it appears that Drumlee City with Harry Skelton on board looks the most likely to be setting the early pace, although with the lack of runs of a lot of these it’s difficult to put any real emphasis on this. 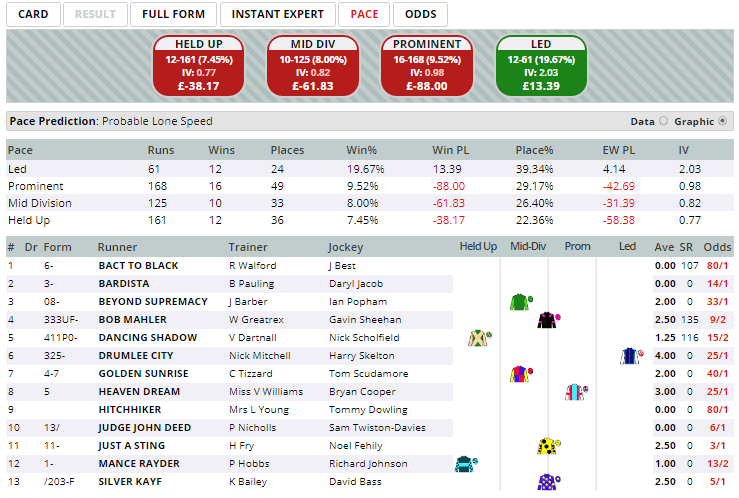