The Last Samuri is the outsider of this field of seven at around 14/1, but he has the perfect score of 15 on The Shortlist, with five sections of green.

He was last seen in the Grand National in April and usually races over further than today’s distance in chases, however, he has won over this trip in the past and has a record of 3/5 in hurdles races.

Prior to the Grand National, The Last Samuri had been running consistently well over the larger obstacles.

Reverting back to hurdles he runs from a seven pound lower mark than his last race over fences, and if fully wound up then I think this gives him a chance. He has run well previously after a long absence and Baily has shown that he is capable of getting his horses ready to win after an extended break.

Taking a look at the Trainer Snippets report on the racecard, we can see that Kim Bailey’s runners have been going well recently. Over the past 14 days, he’s had five winners (27.78%) and eight places (44.44%) from 18 runners, for level stakes profits of 25.00 and 26.01. This has also produced an Impact Value of 2.82, which means he is almost three times more likely than average to have the winner.

The Instant Expert report highlights the good showing of The Last Samuri, but it is worth noting that quite a few of the other runners in this field looks quite well suited to today’s conditions.

The Last Samuri is the only course winner, however, and only one other runner in this has raced here before, which may prove significant.

The Pace report shows that early leaders here over this distance have a decent enough record, with 16.77% of them going on to win the race.

The Last Samuri is usually quite prominent in his races and has the highest pace score based on the last four races of each runner (although a caveat to that is these were longer distances). David Bass is likely going to want make this as much of a test of stamina as possible, so it wouldn’t be a surprise to see him go off in front and try to stretch the field. 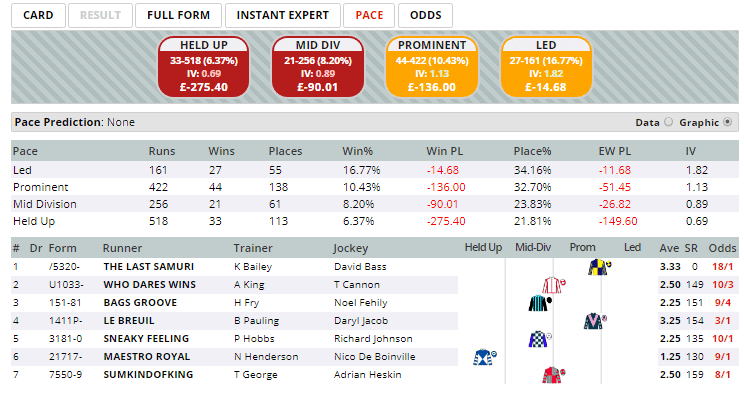