The Trainer Jockey Combo Stats report shows that Fergal O’Brien and Paddy Brennan have been in superb form together over the last month. They’ve had eight winners (33.33%) and 13 places (54.17%) from 24 runners, for level stakes profits of 20.50 and 24.25 respectively. This has also produced an Impact Value of 3.47, meaning they have been almost three and a half times more likely than average to have the winner.

They have just the one runner together at Bangor today, Benechenko going in a maiden hurdle.

Benechenko has had just the two hurdles races to date. He was very much outpaced over two miles at Sandown in his first hurdle race but stayed on strongly at the end and appeared a lot more at home over 21 furlongs last time out at Wincanton. He was again staying on at the finish in that one, therefore, the step up to two miles and seven furlongs looks like it should be about right for him and allow him to show his potential.

O’Brien also has a useful looking record with his middle distance hurdlers having a strike rate of almost one in five.

He also has a 30% strike rate here at Bangor over the past year.

The Pace report shows that early leaders here over this distance have an excellent record, with 25.89% of them going on to win the race for a level stakes profit of 90.31, and an Impact Value of 2.31.

Some of these runners don’t have a lot of form to go by, therefore, it is tricky to get a handle on how this race is going to be run. Benechenko has been reasonably prominent in his races so far and I would expect Brennan to ride a similar type of race today. 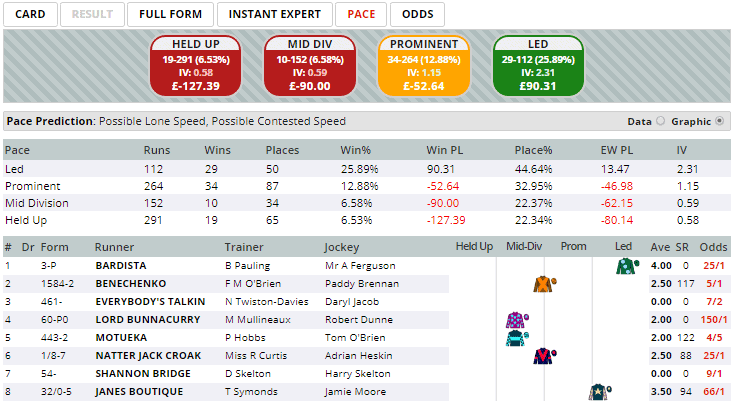