The Sir Mark Prescott trained Boost runs in a seven-furlong handicap on the all-weather at Wolverhampton today, and she has made it onto The Shortlist, with a useful score of 12, having four sections of green.

She looks really well suited to conditions here today so we will take a closer look at her credentials.

Boost is a lightly raced three-year-old with just the five runs to date. In these five runs, she has been placed twice and won another two. She was fourth last time out over course and distance in March, where it appeared the rise of four pounds from the previous race was too much for her. She has had eight months to improve and get stronger and I am hopeful she could have a lot more to offer.

Sir Mark Prescott hasn’t sent too many of his runners to Wolverhampton over the past year but has a good strike rate of 22.22% and an Impact Value of 2.05.

He also has an excellent record in handicaps and does really well with his runners on the all-weather courses.

He has also proved himself adept at being able to get a horse ready after a break, which is relevant for Boost having not run for 254 days.

The Instant Expert report highlights how well suited to today’s conditions Boost is, and she comes out of this report far better than any of her rivals (hence the reason she made it to The Shortlist).

It is also worth noting that she has comfortably the highest Speed Rating in this race, with a score of 87.

The Pace report shows that early leaders here over this distance have a good record, with 14.81% of them going on to win the race, for a level stakes profit of 127.07.

There doesn’t appear to be any real out and out front-runner in this field, however, Boost is usually prominent in her races and led from start to finish to win here in January. 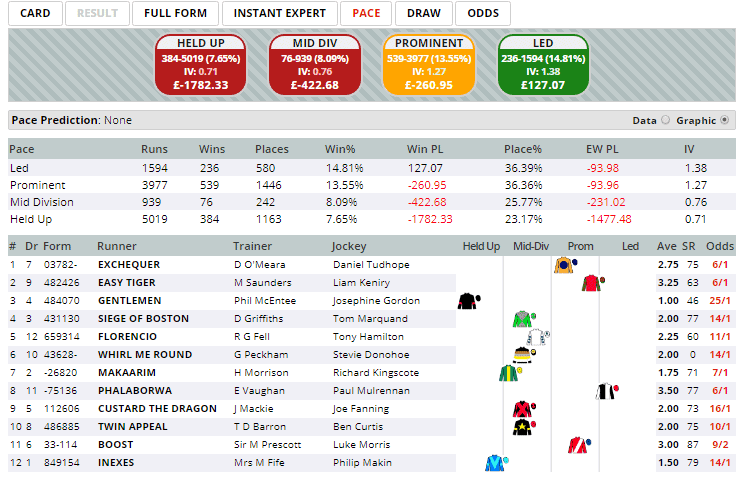