He runs Buckthorn Timothy at Wincanton today and he was a winner last time out at Fontwell.

Buckthorn Timothy’s win last time out was his first run over hurdles for a while and he did it well. That was over 26 furlongs, however, and he steps down in trip a long way today.  He does have previous form over this distance though and any further rain would help.

He’s been raised three pounds for that win at Fontwell, but that seems fair enough and certainly isn’t insurmountable.

The Trainer Snippets on the racecard show highlight of Tizzard’s form is with last time out winners, but he has also been among the winners recently and his horses appear to be in fine fettle at the moment.

Mitchell Bastyan has had a few winners recently and he will be claiming an extremely useful five pounds here today. This in effect means that Buckthorn Timothy will actually be carrying two pounds less than when winning at Fontwell, and this could be a big help.

A few of the runners look good on the Instant Expert report, and Buckthorn Timothy is one of them. When this report is on the ‘Place’ setting, he has three sections of green and one of amber, showing that he is nicely suited to conditions in this race.

The Pace report shows that early leaders and prominent runners have a clear advantage here over this distance.

Buckthorn Timothy is usually quite handy during his races and I imagine Bastyan will want to make this as much as a stamina test as possible, given that we know that BT stays a lot further than this. 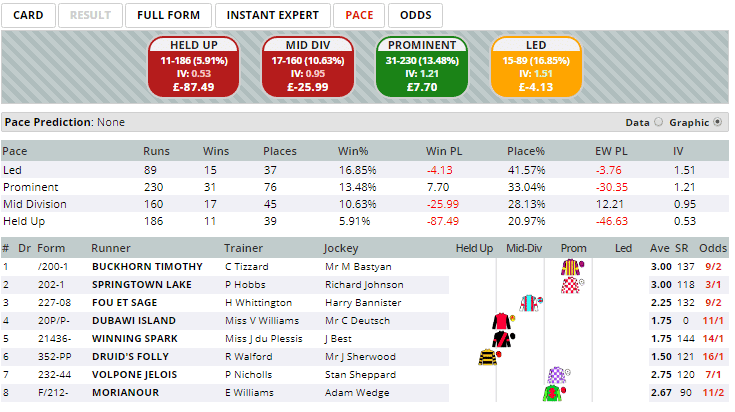