News finally emerged this week of the BHA’s intention to record surgical interventions to improve horses’ breathing. Commonly known as wind operations, these have been contentious in the punting domain largely because of the frequency with which good animals who’d lost their way stepped forward after a subsequently declared tie back/palate fire, etc.

Along with many others, I’ve been blethering on about the need for transparency on such matters for years (see for instance this eye-opening post from January 2015). And, more recently, I’ve been able to support the Horseracing Bettors’ Forum push for this information to be presented in the public domain as a member of that group.

Now let’s get this straight: when the information appears on racecards from 19th January next year, we should not all be charging to back any horse which has received an epiglottal intervention. A breathing op cannot make a slow horse fast. That’s not the point.

So this will be no panacea. But, of course, you knew that already, right? Moreover, the information will be generic, making no account of the severity of the procedure. It seems sensible to trust the vet/trainer/owner axis to make the right call on the appropriate operation.

By the end of next year, we’ll have a view on plenty of things in this space, with the utility of that new information not solely confined to bettors. No, the owner, trainer and breeder communities – those crying foul right now – all stand to benefit in time from better awareness of exactly what they’re buying. Sure, in the short term it could show certain stallions in a poorer light. But, by the time most sires have come into and gone out of fashion, there will be evidence to support breeding and buying decisions. That has to be a good thing, regardless of the myopic outpourings from some stakeholder groups this week.

geegeez.co.uk will naturally be displaying the wind op ‘W’ on our cards as soon as we have the data to do that. It has been suggested that the notation will only appear on the first run after an op, but we will likely indicate how many runs since an intervention. I’m thinking we’ll probably also make it clear in the full form of a horse when a wind op (or multiple ops) has/have happened.

And, in time, we’ll add this to our Query Tool, allowing users to interrogate data pertaining to trainers, stallions, whatever. This information will not be useless: no information is useless. But it is very likely to have less ‘point and shoot’ utility than some hope for. After all, if it did, it would be immediately factored into market prices, further improving some mugs’ ability to find winners at the expense of profit. No, time will tell how we can best engage with the data. But not having the data has ceased to be an option.

Let us also hope this is the beginning of a more open information age in British racing. HBF – and others – have been asking for more on race mares in foal, horse weights, and for the tightening of data collection and dissemination around such as going readings and race distances. Perhaps one day horses off the track for, say, a year or more will be required to be entered with a reason for their absence; and maybe all surgical interventions will be declared.

That’s for another day. For now, we as punters – but also as owners, trainers and breeders – should be pleased that we have more information on which to base our investment decisions.

Anthony Honeyball is a trainer in form right now. Five winners from his last six runners, comprised of a first career treble and a double, have hinted at a better standard of horse in the yard this term. But it is perhaps the breadth of job those horses do which has been most heartening: a juvenile hurdle, a staying handicap chase, a handicap hurdle, a novice chase, and a National Hunt Flat race comprised that recent quintet of victories.

Anthony, whose yard geegeez.co.uk is delighted to sponsor and to support with runners, is a very smart operator. Since 2009, his record in all handicaps – ALL handicaps! – is a 20% win strike rate and a profit at SP of 107.61 points. That’s from 554 runners making an ROI of 19.42%. At starting price. It is hard to argue with such consistent performance over such a long time, and there remains, bizarrely in my opinion, value in betting his runners.

Anthony actually started training at around the same time geegeez’ forerunner, Nag Nag Nag, first appeared on computer screens, back in 2006. This website began in 2008 and moved into the racecard/form tool game in 2013. So we’re still pretty new to it, but I hope we’ve made some very solid progress since inception. There is much more I/we want to do, most of it suggested by you, our loyal subscriber.

Away from the form book functionality, sponsorship is important in establishing ‘the brand’ to the wider racing world, on racecourses. All of Anthony’s horses are decorated with the geegeez.co.uk logo, either on the breast of the jockey’s silks or on the paddock sheets and rugs the horses wear in the parade ring before and after racing or, in most cases, both.

We also sponsor a couple of flat jockeys. David Probert has recently signed up for another three years, and he’s an excellent ambassador for us. David rides around 800 horses a year, each time flashing the geegeez red, white and blue to a racecourse and specialist TV – in homes and betting shops – audience. Moreover, he rides a lot of winners: 92 so far this year and counting. That puts him in the top 15 jockeys, by number of winners, in Britain, ahead of the likes of Jamie Spencer, William Buick, and Frankie Dettori, and on a par with Paul Hanagan (former champion jockey) and Andrea Atzeni.

David is an excellent jockey who, as well as riding for Andrew Balding, is called upon by Godolphin, Sir Michael Stoute, and many of Newmarket’s other biggest guns. A dedicated professional who gets his head down in an unfussy way, he arguably should get more opportunities. Be that as it may, he’s an asset to the sport and I’m delighted that we’re able to support him, and he us.

geegeez.co.uk has also just agreed to extend Mitch Godwin’s sponsorship agreement for another year. Mitch has ridden 25 winners so far this year, and is on the 54 winner mark overall. He’ll receive a three pound claim until hitting 95 career winners, and I’m personally looking forward to seeing how he’ll improve next year. Mitch is undoubtedly a better rider now than a year ago, and there’s every likelihood we’ll again be able to say that in twelve months’ time.

From a personal perspective, it’s an absolute pleasure to work with such dedicated professionals, to support them, and to enjoy their support of the geegeez.co.uk brand. With their, and your, help we’ll keep growing.

I sloped off to France earlier in the week. Somewhere between a jolly boys’ outing and a business trip, I met up with Anthony Honeyball and Jeremy Blackburn, husband of Anthony’s racing secretary and keen supporter of the yard, at Portsmouth Harbour. The overnight ferry beckoned with its welcoming bar and less hospitable ‘executive chair’ sleeping arrangement.

The purpose of the trip was to scout the middle day of Arqana’s three day sale at Deauville. Our itinerary was set: alight the ferry at Caen, drive the hour to Deauville and, specifically, to Chez Huggins. Ron is best known as owner of the fantastic Ascot Gold Cup and three-time Goodwood Cup winner, Double Trigger. But he’s had plenty of other good ones, including a nice juvenile hurdler called Jukebox Jive, which formed the opening leg of Anthony’s Sunday triple at Fontwell.

Over coffee and pastries – oh, go on then, just one more – we discussed Ron’s shortlist, slavishly arrived at through consideration of dam sires, dam’s progeny and the likelihood of the sire being dual purpose (flat and jumps). For someone who has a pretty good handle on the form book but barely a toehold on the pedigree book, this was a masterclass delivered by an experienced – and proven – practitioner.

Armed with the subset of the catalogue of most interest to us, we headed to the sales yard to inspect the possibles. This is where Anthony took centre stage, examining limbs, gaits, and conformation. Ron is no slouch in this department either and made an ideal foil. From the shortlist of fifteen, just three were deemed worthy of a bid. This trio was arrived at over an excellent lunch where we were emboldened by a couple of bottles of claret, and the presence, to our immediate left, of racing royalty: Freddy and Criquette Head. It was a thrill to relive a couple of their finest memories – Goldikova’s third Breeders’ Cup Mile, Treve’s second Arc – and they were generous with their time and gracious in their ‘fan management’. [Incidentally, I remain primarily a fan of the sport, in spite of how business has interloped]

Lunch eaten – drunk mainly, in truth – the bidding began. Anthony was interested in the very first lot, but was outbid by the vendor. Offered the horse later at his closing bid, he decided to keep counsel until all of the lots holding our interest had passed under the hammer. 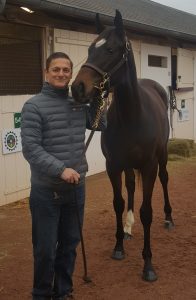 The proud acquisition, a gorgeous yearling filly by Solider Of Fortune out of Heartbreak City’s dam

A short time later came lot 320, a cracking little filly yearling by Soldier Of Fortune, out of a dam called Moscow Nights. Dad has shown himself to be the epitome of a dual purpose sire, and has plenty of good ones both on the level and over hurdles, including most recently Soldier In Action, who won a Class 2 two mile handicap last night off top weight and a mark of 106.

Mum was owned by the Wildenstein ecurie, and stayed well. She is most notably the dam of Heartbreak City, winner of the Ebor and an agonisingly close second in the Melbourne Cup last year. Those high profile, and extremely lucrative – the Ebor is Europe’s richest handicap – flat performances followed a win in a competitive Galway Festival handicap hurdle. This was precisely the sort of dual purpose pedigree we were searching for.

Bidding was keen in the early go, with probably half a dozen hands moving the price to €20,000. That was a ceiling for most, but the filly continued to ascend, up to €25,000. One more nod of the Honeyball head was enough to seal the deal, however, and this little charmer will be heading to Potwell Farm at the earliest opportunity, knocked down for €26,000. I’ll be syndicating her shortly, with – as always – first priority going to existing syndicate members.

The plan will be for her to have a run or two next year prior to a full flat campaign as a three-year-old and then go juvenile hurdling. Thereafter, we’ll see where she takes us. If she’s within a furlong of her half-brother we’ll have a lot of fun!

Ron was less fortunate. He sold one for little more than he’d have kept her for, and failed in his attempts to secure a couple of others, out-funded by the bottomless pockets of Highflyer Bloodstock, who were extremely active.

A very enjoyable dinner in Trouville – and more wine – was followed by the ferry bar and that ‘executive chair’ for a far less enjoyable kip: the imperfect end to what was a fantastic jaunt.