The Trainer Jockey Combo Stats report shows that the partnership of Graeme McPherson and Kielan Woods have been in really good form over the past month. They have had four winners (21.05%) and ten places (52.63%) from 19 winners, which has produced level stakes profits of 0.10 and 2.65 respectively and an Impact Value of 2.09.

They have just the one runner together at Sedgefield today, which is Harry Hunt, in a three miles and two furlongs handicap chase.

Harry Hunt has started the season off well, with a heavy ground win over 22 furlongs at Ayr. He was slightly outpaced that day but rallied well to win, and looks likely to enjoy this step up in trip, as he has stayed this far in the past.

He does have an extra three pounds to contend with today, but with the hopeful improvement from the longer trip, I think he has a good chance of being involved. 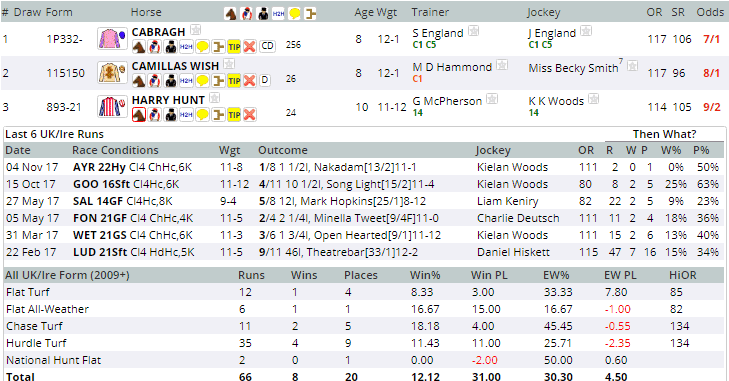 Although it is showing a small level stakes loss, McPherson has a strike rate of 24% with last time out winners.

Harry Hunt’s sire, Bertolini, hasn’t produced too many horses that go chasing, but the ones he has produced have an impressive record. From 29 such runners, there have been eight winners (27.59%) and nine places (31.03%) for level stakes profits of 11.08 and 2.65 respectively, and an Impact Value of 2.19.

Runners that are nine years old and above over the jumps have a decent looking record as well.

Early leaders here over this distance have comfortably the best record, with 23.33% of them going on to win the race for a level stakes profit of 22.16 and an Impact Value of 1.52

Harry Hunt is usually quite prominent in his races and I would expect Woods to again track the leaders through the race. 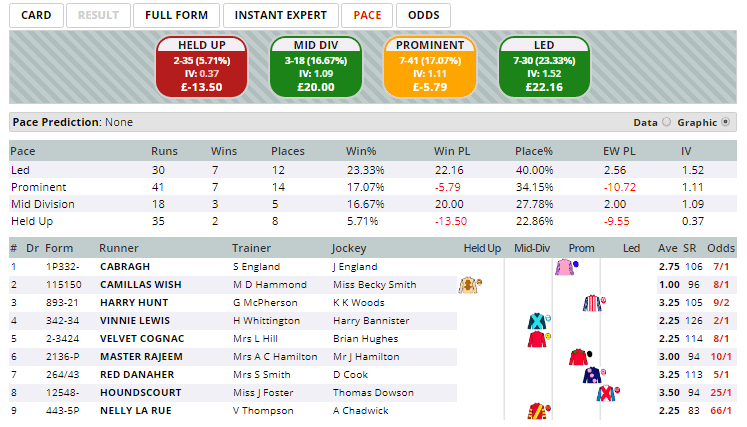