The Trainer Snippets report shows that Ben Pauling has an excellent record with horses he inherits from other yards (Trainer Change). From his last 18 such runners, he’s managed five winners (27.78%) and eight places (44.44%)  for level stakes profits of 12.75 and 13.46 respectively. This has also produced an Impact Value of 3.11, meaning he is a little over three times as likely as average to have the winner.

Stage Summit runs for him for the first time today, in a two and a half miles novices’ hurdle at Hereford.

Stage Summit won his last race for his previous trainer, which was a bumper over two miles at Limerick in July. The third horse in that race has since come out and won, and his breeding suggests that the step up in trip today to two and a half miles will be in his favour.

The report also shows that he has a good record with hurdlers and middle distance jumpers, but producing good level stakes profits over a large sample of races.

The Pace report shows that early leaders and prominent runners have the best record here over this distance, with win records of 13.13% and 11.51% respectively.

One of the rank outsiders, Oologist, and the favourite Court Liability, look likely to be the early leaders as they have easily the highest pace scores.

I would expect Jacob to be fairly prominent and will track the favourite throughout the race. 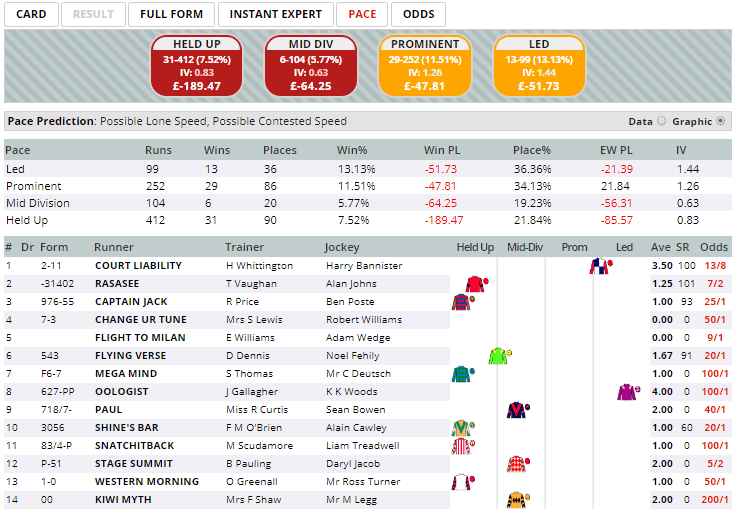