The Trainer Snippets report shows that Charlie Mann has an excellent record with his hurdlers over the shorter race distances (Jumps-Speed). From his last 54 runners, he’s had 13 winners (24.07%) and 19 places (35.19%), for level stakes profits of 34.54 and 25.30 respectively. This has also produced an Impact Value of 2.24, which means he is over twice as likely as average to have the winner.

He runs Glorvina in a mares’ novices’ hurdle over two miles at Lingfield today.

Glorvina is just a three-year-old and has had four hurdles races to date. She won first time out at Cartmel and has also had a second and a third-place finish. It appears that she prefers conditions with a good bit of cut in the ground, so the soft going here at Lingfield today will hopefully suit her.

The extremely promising looking claimer, James Bowen, takes the ride today and the five pounds that he is able to claim could be very useful.

Charlie Mann’s runners have shown some form over the past couple of weeks. He’s managed to have two winners (25%) from eight runners, for a level stakes profit of 23.50 and an Impact Value of 2.38.

There are not too many sections of green when looking at the Instant Expert report due to this being a novices’ hurdle, however, Glorvina has them for the going and class, which is encouraging.

The Pace report shows that early leaders here over this distance have a super record, with 25.53% of them winning the race, for a level stakes profit of 24.00 and an Impact Value of 1.93.

Glorvina has comfortably the highest pace score in this field and looks the likely early leader. Hopefully, Bowen will be able to settle her into a good rhythm and then with his claimers allowance together with the three-year-old weight allowance that she receives, they will be tough to pass. 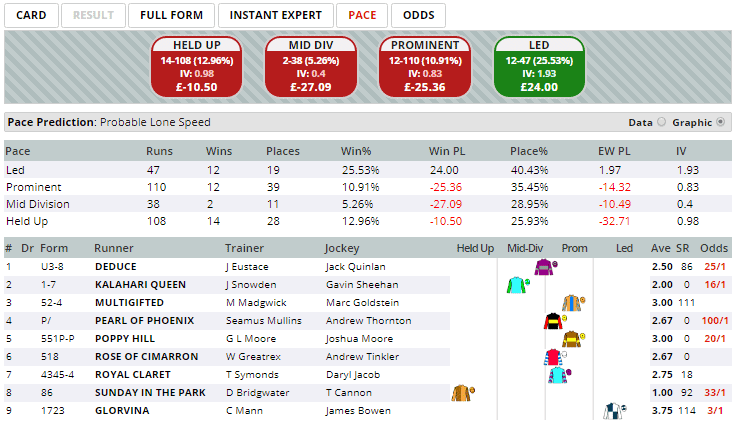