One of the showpiece events of the bumper Christmas racing calendar is the Coral Welsh Grand National at Chepstow. Run the day after Boxing Day over a trip of nigh on three and three quarter miles, the going is perennially testing meaning a horse requires stamina and jumping ability in abundance.

horseracebase.com allows us to look at data for the last twenty Welsh Nationals, and there are some interesting findings…

Looking at the below table, we can see from the three columns on the right that younger horses – those aged eight or lower – have out-performed their numerical representation in both win and place terms. Collectively, they accounted for 51% of the runners over two decades, and scored 75% of the wins and 61% of the places.

Conversely, those aged ten and up recorded a solitary victory (5% of the winners) and eleven places (14.5%) from a quarter of the runners.

We’ll leave the nine-year-olds in for now, but the double-digit brigade are eliminated from consideration.

It’s always a bit precarious making assertions based on a single run, even if it is the effort in closest proximity to the event in question. Still, there are solid pointers to be found therein, notwithstanding the potential to lob baby with bathwater, as follows:

ALL of the last 20 Welsh National winners finished in the top six last time out, from 71% of the runners. That group also accounted for 86% of the placed horses.

Indeed top four last day runners claimed 85% of the winners and 72% of the places from just 58% of the runners. 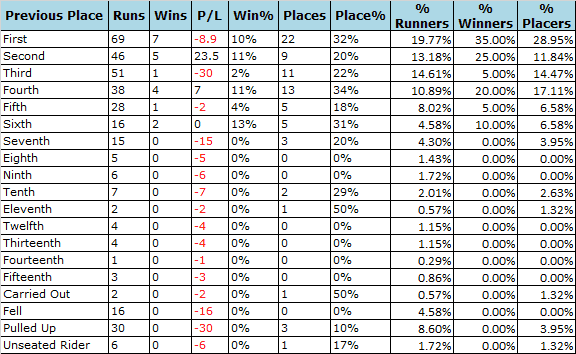 Welsh Grand National: Last Time Out Trends – a good run has been crucial

Those outside of the top six last time, including non-completions, are eliminated at this stage.

And what of absence – days since last run if you like?

Welsh National: Days since last run trends – not too soon!

Those returning within a fortnight of their previous run are 0 from 31, three places. That’s 0% winners, 4% placers, from 9% runners. Most entered for this, sensibly, have had a longer break.

Indeed all twenty winners since 1997 last raced between 16 and 60 days ago, as did 72 of the 76 placed horses. True, that is from 83% of the runners, but the other sixth of the field look to have a lot to do to defy history, and are scratched from the possibles list.

An interesting line on the ‘where’ of last run…

One thing I stumbled upon when looking at last run data was the venue for that most recent spin. I discovered that no fewer than eight of the 20 Welsh National winners in the sample had their last race at… Chepstow! That was from just 51 runners, and also included twenty placed horses.

To put that into similar sample size context, it represents 40% of the winners, and 26% of the placed horses, from less than 15% of the runners. As a group, they recorded a 74 point level stake win profit at SP, and 108.75 points level stakes each way profit, also at starting price. Crikey.

The allocation of weight is directly linked to official ratings and, as such, it makes sense to cover them off together. Due to the rating of the official best horse from year to year, and the ability spread in the field, the two elements can reveal divergent patterns, though that is not especially the case with this race.

The top weight has won the Welsh Grand National just once in the past two decades – six-year-old Native River last year – and it is generally the case that those carrying less weight win. However…

…it is also the case that most horses carry “less weight”. Most years, there is at least one classy animal atop the handicap which means most others in the race are set an impost of eleven stone or less. 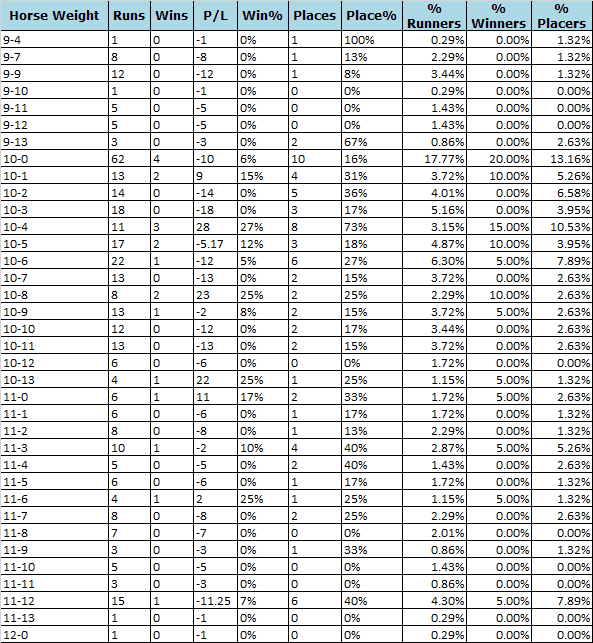 Welsh National: lower weights have tended to be favoured

In specific terms, over the last twenty years, 76.5% of the runners carried eleven stone or less, winning 85% of the renewals, and placing 75% of the time. In other words, there was no discernible advantage from carrying less weight except the one bestowed by ‘weight of numbers’.

Whilst only Native River claimed the whole enchilada from top weight, six of the 15 to lumber 11-12 made the frame. American looks set for that role this term, his 157 perch being the highest in the early entries.

In Official Ratings terms, we have the following dataset: 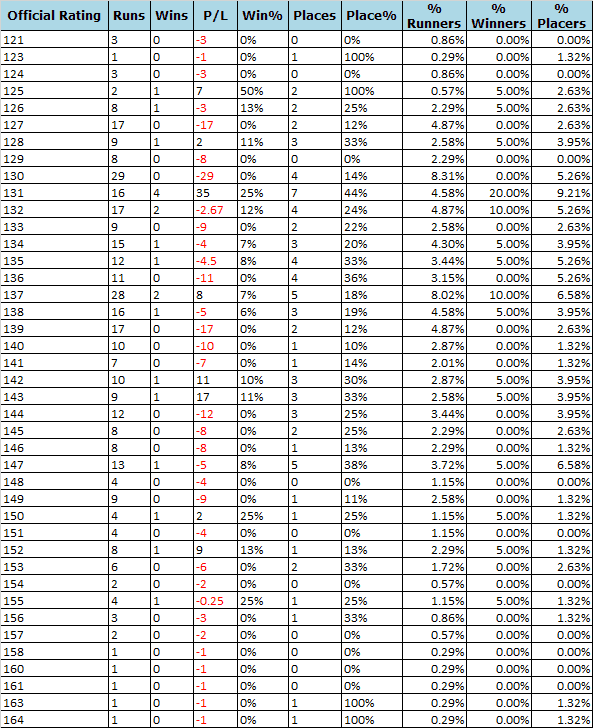 Looking at those rated 140 or lower, those rated 140 to 150, and those rated 150 or higher, there is no discernible advantage. Each group made the frame within a few percentage points of their numerical representation. Next!

How does one define experience? For the purposes of this preview, the focus is on number of chase starts and number of chase victories, in that order. As you’ll see, there are some constraints in the way horseracebase.com presents this data, exacerbated by my own time constraints preventing closer scrutiny. However, it remains possible to divine a slight bias to those more lightly raced.

What about wins over fences? The key here is surely an optimal balance between progressive winning form and not showing the lot to the handicapper and suffering the commensurate weight imposition. At least that’s what the data say…

Those to have won the most – six times or more – failed to win the Welsh National in the last two decades, albeit from just 26 runners to try. Moreover, six of them made the frame, which is about on par with numerical representation.

As mentioned, a balance between winning chase form and not too much of it seems ideal. Horses with two to four prior chase victories made up 62% of the fields, and won 15 (75%) of the races, placing 68% of the time. That amounts to a small positive.

Soft ground generally and most of four miles to cover means that stamina is an obvious asset. The below table shows how horses have fared since 1997 based on their furthest winning race distance. 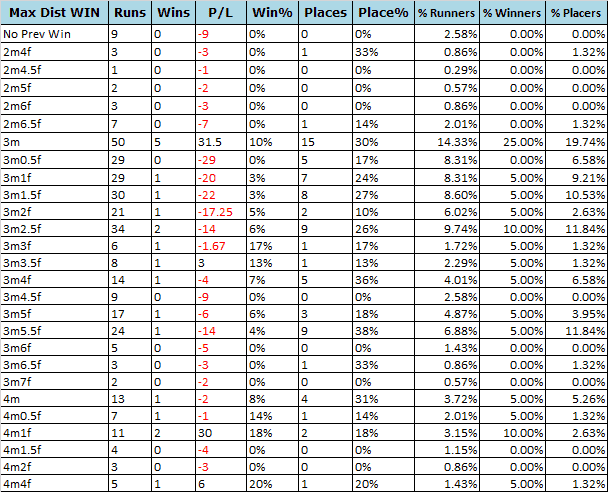 Those yet to win at three miles or beyond have failed to land a meaningful blow, albeit from just a handful of runners. 0 from 25, two places, means any such entries are dismissed from consideration.

Winners over at least 3m2f made up just over half of Welsh National runners in the last twenty years, and bagged 65% – thirteen – of the wins. But their place record was almost exactly in line with their volume suggesting there is little of utility here.

Those with three or more wins on the advertised going, which is often soft or heavy, were seven from 49, 16 places. Thus, while the 14% win rate is aligned to a 14% representation of runners, the 21% place strike rate is 50% above what might be expected. Materially, those winners were worth a win profit of 28 points at SP, and 54.38 points for a one point each way level stake at SP.

Welsh National Trends: Putting It All Together

There are some fairly strong Welsh National trends in play based on the evidence of the last two decades. Particularly noteworthy are horses aged nine or younger, those which finished in the top six last time, and those who last raced between two weeks and two months ago.

Combining those three elements would have found all bar one of the last twenty winners, and 71% of the placed horses, from just 46% of the runners. The winners, backed at SP, returned a level stakes profit of 65.58 points. A point each way on the 162 qualifiers collected 116.16 points profit at SP.

Those who fit this bill in 2017 include Vicente, Beware The Bear, Chase The Spud, Baie Des Iles, Final Nudge, Bishops Road, and Vintage Clouds.

Chase The Spud is the one for me. His form at three miles-plus on soft or heavy reads 1P2P1327511, the most recent brace of victories coming in the Midlands Grand National (four and a quarter miles) and in very testing conditions at Haydock (three and a quarter miles, second has won well since). 12/1 is a fair price, with this lad having everything in his favour including a prominent run style. If the nine pounds rise since Haydock doesn’t do for him, he must go very close. He could easily be half those odds on the day.

Vicente was beaten off his Welsh National mark of 151 in the race last year, in between back-to-back Scottish National victories off 146. He should again run well, but will surely again have a spring target – off a slightly lower mark – in mind.

That leaves Vintage Clouds, a rare winner but nevertheless a highly consistent sort, whose form over three miles-plus chases reads 2F3F712. The ‘7’ came on good ground in the Scottish Nash last year, and this progressive son of Cloudings, still only seven years old, can make the frame at an attractive price.