He runs Full Jack for the first time today in a three-mile handicap hurdle and it is his first race since May last year.

Full Jack was last seen over the larger obstacles but prior to that he had been running consistently in hurdles and his handicap mark has now dropped far enough for him to be dangerous is a switch to the Thompson yard and a change of scenery has worked for him.

He also has jockey Rachael McDonald claiming a further seven pounds, which could prove extremely useful.

The Thompson yard has been among the winners recently and he also has a particularly good long-term record here at Musselburgh. Over the past five years, he’s had 15 winners (23.08%) and 32 places (49.23%) from 65 runners, for level stakes profits of 54.56 and 67.53 and an Impact Value of 1.87. These are impressive figures and the strike is over 5% higher than his overall record.

The Pace report shows that early leaders have the best record here over this distance, with 17.95% of them going on to win the race for a level stakes profit of 12.64 and an Impact value of 1.6.

There doesn’t appear to be any real consistent front-runner in this field, although Full Jack has led in two out of his last four races and it will be interesting to see the tactics employed with his for his new yard. 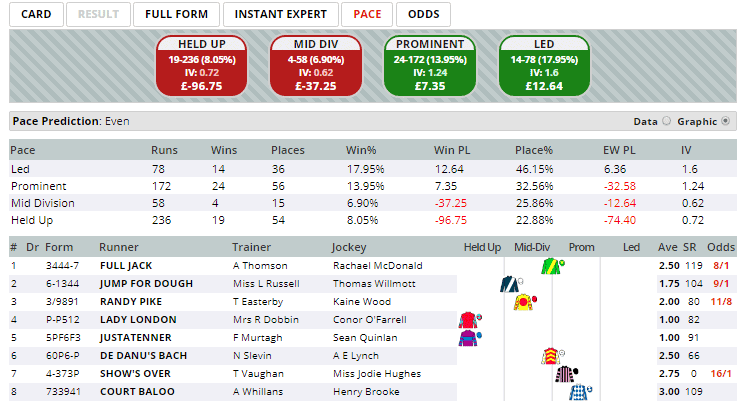