It remains to be seen how much of the racing goes ahead this Saturday but, as it stands, we have competitive and classy meetings at Chepstow, Sandown and Wincanton. Below are a few thoughts on the fixtures at Sandown and Chepstow.

A small field but three of the five want to lead, which might make things messy. In the circumstances, the generally waited-with Overtown Express, who is two from three on heavy, may be the answer. He fell last time when odds-on in a match race but was a facile ten length victor on his last completed start. He’s not a sexy price but things could pan out optimally for him now his trainer, Harry Fry, is back amongst the winners.

A Grade 1 but a slightly disappointing field. With Sussex Ranger likely to go to Chepstow for the G1 Juvenile if racing goes ahead there, we’re left with five here. Amy Murphy’s Kalashnikov is unbeaten and a very exciting prospect who will get every chance from his under-rated rider, Jack Quinlan. But Western Ryder might just have too many guns for him (see what I did there?!).

Warren Greatrex’s lad was right on the premises in the Cheltenham and Aintree Champion Bumpers in the spring, and beat a solid yardstick in Lalor last time. His win the time before was on heavy ground so he should handle conditions.

Paul Nicholls has an excellent record in the race, which since 2001 reads 22127111342. He saddles Mont Des Avaloirs, a winner on heavy and the holder of strong form from his fall when looking to have the measure of Kilbricken Storm. That one has won a Grade 2 before slightly disappointing in the Grade 1 Challow Hurdle recently.

The Russian Doyen is unexposed but will have to step forward plenty for last season’s winning trainer, Colin Tizzard.

An interesting betting heat where the youngest competitor is eleven years old! To thin out the field, I’ll use place records on heavy going and in Class 2 races. That gives a shortlist as follows: 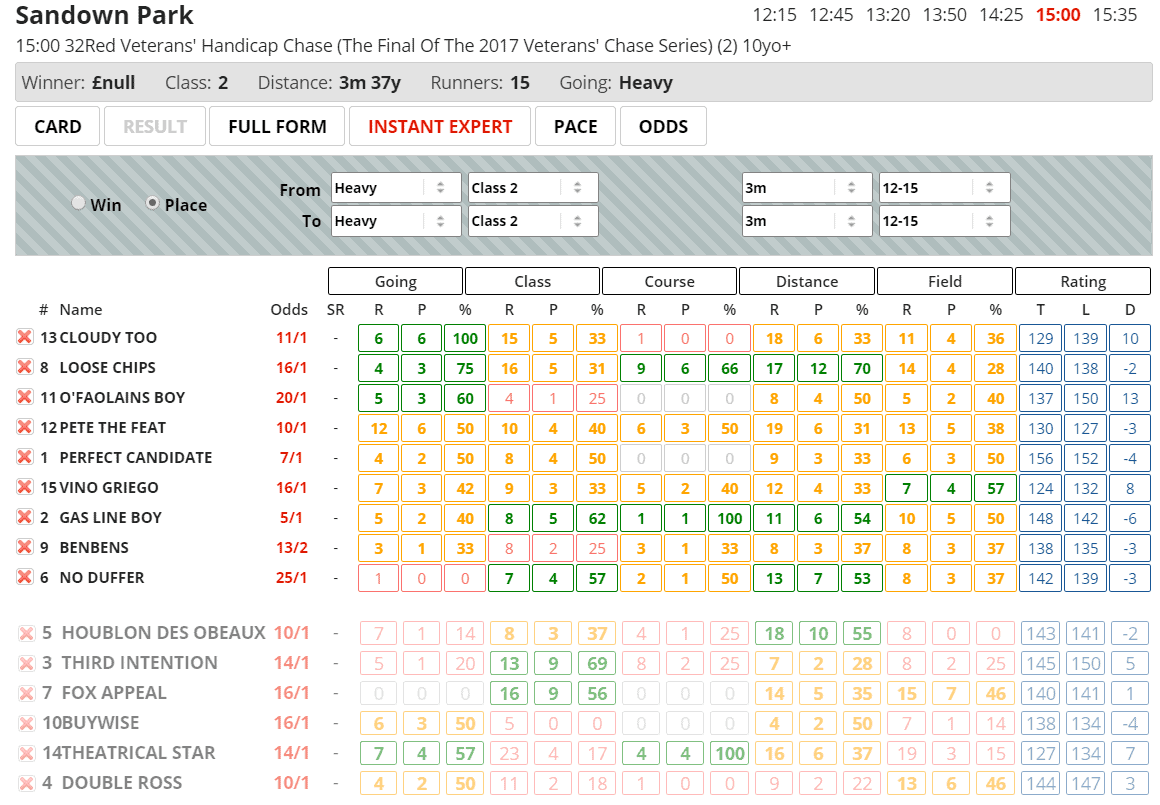 Sandown Veterans’ Chase: form on heavy and in the grade a prerequisite

Loose Chips is the second choice of the Charlie Longsdon yard – according to the betting at least – behind 14-year-old Pete The Feat. But, while the old man of the party winning would be a sentimentalist’s dream, I like the pace-pressing style of his barn-mate. As can be seen, Loose Chips has an excellent record at Sandown and on heavy ground. He’s within two pounds of his last winning mark and 20/1 is too big.

Others to consider are 8/1 Perfect Candidate, for whom conditions are spot on but who has a lot of weight; and 20/1 O’Faolains Boy, who’d carry these on his best form… but we’ve not seen his best for some while, and may not see it again.

A two mile heavy ground handicap hurdle for which Our Merlin is up an eye-watering 23 pounds since his last run/win. He’s won his last three without coming off the bridle and, though this is a steep rise in grade, he is clearly progressive, handles deep ground and represents a trainer in form. His jockey eases off seven of the 23 pounds hike.

If Drops Of Jupitor (10/1 Betfair/PP) settles, she too will have a chance, with Richard Johnson a rare booking for the geegeez-sponsored yard of Anthony Honeyball. He won for the trainer the only other time he’s ridden for him in the last few years.

Like the Welsh National which follows, this race has been rearranged from the waterlogged December 27th meeting, and hopefully Chepstow’s racecourse team will have more luck with the weather this time. It’s a small field assembled, headed by Nicky Henderson’s French import, We Have A Dream. The Souede/Munir-owned four-year-old is unbeaten in two starts since arriving in Britain, most recently when dancing ten clear of his field in a Doncaster Grade 2. That was on much better ground, however, and he has to show similar affection for hock-deep turf. He was beaten three times in France when it was very wet and that’s reason enough to look elsewhere.

Sussex Ranger‘s Sandown win was made to look better than it might have been by the under-performance of market leader, Jukebox Jive. The second horse, Quothquan, has since run only okay at Fontwell so, while Gary Moore’s horse could improve again, he has plenty on his plate against some classy and unexposed rivals.

They include Mercenaire, who won very easily albeit against a weak field at Exeter on soft last time. That was the son of Soldier Of Fortune’s first UK run, and trainer Nick Williams won this race with Le Rocher in 2013 and Me Voici in 2009. Williams’ full form string in the race is 5631173, making Mercenaire of definite interest.

Gavin Cromwell’s Irish raider, Famous Milly, won an Aintree Listed Fillies’ Juvenile Hurdle last time. Although that was on heavy, it looked a weakish race and she may need more than the seven pounds sex allowance to beat the boys.

And though he surely can’t win, I’ll be interested in the run of Staff College, who ran a distant second to our own Oxford Blu last time. He did plenty early that day and paid late on, so if rated a bit better he might offer a hint of promise in the collateral form line.

I previewed the Welsh National ahead of its original scheduling on 27th December and, with most bookies’ bets standing, I don’t plan to change my tune now. Both selections have shortened somewhat in the meantime, as you can read here.

Nige Keeling has also taken a look at the race, and his thoughts can be found here.