The Trainer Snippets report shows that Keith Dalgleish has a brilliant record with horses he has inherited from another stable having their first run for him. From his last 53 such runners, he’s had 15 winners (28.30%) and 26 places (49.06%), which have produced level stakes profits of 25.52 and 41.30 respectively and an Impact Value of 3.17.

Artful Rogue is having his first run for Dalgleish today in a two-mile handicap on the all-weather at Newcastle.

The recent form of Artful Rogue is fairly average, with this Excellent Art gelding being placed in two of his last six races.

It is interesting that Dalgleish steps him up in trip a long way for his first run for him, as the furthest he has run previously was 13 furlongs. He looks like he is bred to get this extra distance so it is perhaps not so much of a surprise that Dalgleish is trying him over two miles, especially as his handicap mark has dropped a little as well.

As well as having a great record with newly acquired horses, Dalgleish has been in useful form over the past couple of week. He’s managed three winners (21.43%) and seven places (50.00%) from his last 14 runners, for level stakes profits of 2.00 and 0.68 respectively and an Impact Value of 1.85

There are not too many sections of green when looking at the Instant Expert report.

Artful Rogue has one section of green (Class) and one of amber (Going), so doesn’t look too well suited to today’s conditions. He is untried over at the course, and as previously mentioned, over this distance so at least they are grey and not red sections.

From a small sample, the Pace report shows that prominent runners have the best record here over this distance, with 22.45% of them going on to win the race, for a level stakes profit of 5.54 and an Impact Value of 1.68.

Artful Rogue is usually fairly prominent in his races but it remains to be seen if he runs that way over this new distance. 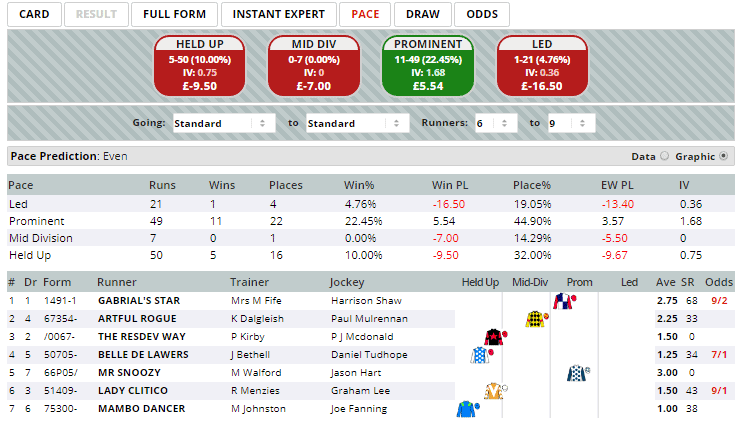