Horses For Courses is the report that is available to all registered users on a Friday, and it shows that Miss Minuty has a good record here at Lingfield. She has had three wins and places from five races, for level stakes profits of 23.00 and 26.00 respectively.

She is aiming for a hat-trick of wins over course and distance in this one and is the current 9/4 favourite.

The form of Miss Minuty was quite poor until her mark dropped sufficiently and she was taken back to Lingfield. Since then she has taken both races in comfortable fashion under claimer Jason Watson, and bids for a hat-trick from a four pounds higher mark. She is clearly in good form and I am hopeful that even with the extra four pounds she can be extremely competitive again.

Trainer Jeremy Scott has been in good form recently and has been sending out winners. Over the past 30 days, he’s had five winners (20%) and eight places (32%) from 25 runners, for level stakes profits of 6.50 and 0.60 respectively, and an Impact Value of 1.82.

The Instant Expert report shows that Miss Minuty is well suited to today’s conditions, with two sections of green and three of amber. As mentioned previously, she is four pounds higher than for her last victory which hopefully won’t be too much to stop her.

Early leaders here over this distance and prominent runners have the best record when looking at the Pace report, however, they are both showing level stakes losses so it isn’t a huge bias. There also doesn’t appear to be a lot of pace in the race, with either Colourful Hill or Bayston Hill looking the most likely early leaders.

Miss Minuty is usually held up toward the rear of the field and I imagine Jason Watson will use similar tactics again today. 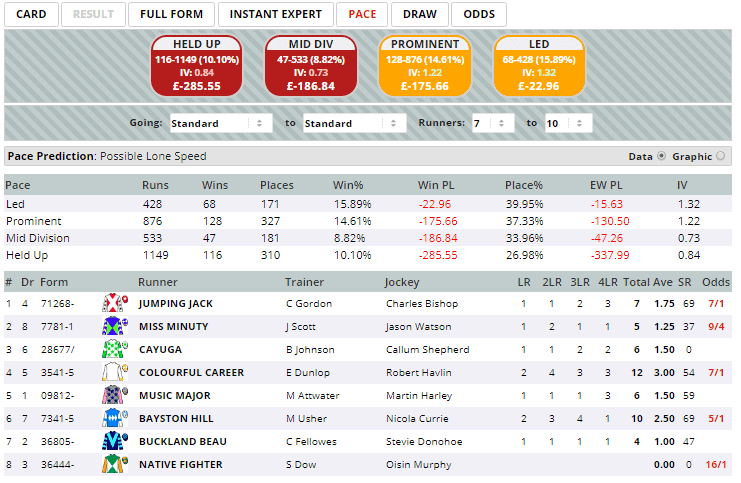