Island Brave makes it onto The Shortlist with a decent score of 12, having four sections of green. He has a grey section for the field size, however, he won a race with 12 runners in November so that has little relevance for me.

He runs in a competitive one and a half mile handicap today and is currently priced around 11/2.

Island Brave has been in good form and interestingly his last three races have been over distances ranging from nine furlongs to two miles. He appeared to get home over two miles last time out but drops back down to one a half miles today, and he won over course and distance two races ago.

He is now five pounds higher than for that win but looks to be improving and a repeat of that performance here today will surely see him go close.

Heather Main doesn’t have a lot of runners here at Wolverhampton, but her record is good when she does send them here. Over the past year, she’s had three winners and places (27.27%) from 11 runners, for level stakes profits of 39.00 and 41.65 respectively and an Impact Value of 2.52.

It is also worth noting that her strike rate in handicaps is almost 2% higher than her overall record.

The Instant Expert report highlights the good showing of Island Brave with his four sections of green, and it also shows that Royal Reserve is well suited to today’s conditions with three sections of green and one of amber. He is also just the two pounds higher than for his last victory.

The Pace report shows that prominent runners here over this distance have the best record, however, it isn’t by much which shows there doesn’t appear to be a huge bias.

Valitop and Bostonian have the highest pace scores and look the most likely early leaders, whilst Island Brave will probably be held up towards the rear of the field and waited with. 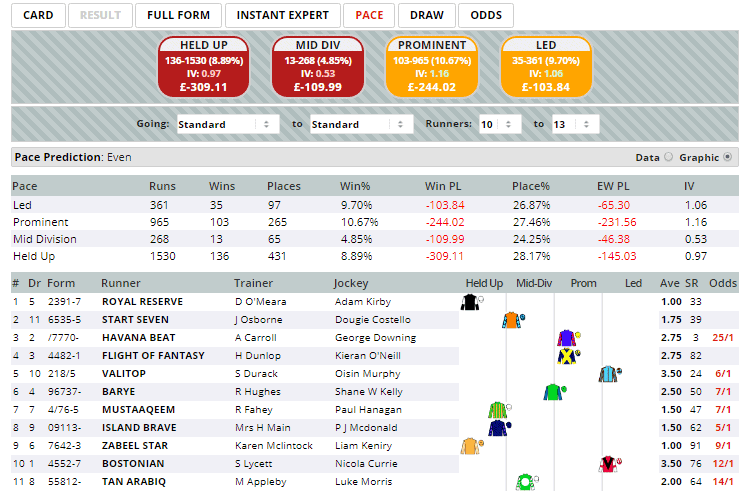