Zylan has been off the course for well over 100 days but he makes The Shortlist on his comeback with a very good score of 13, having four sections of green and one of amber.

This shows he is nicely suited to today’s conditions in which he races on the all-weather at Southwell in a five-furlong dash.

Zylan’s form was not particularly good last summer where he finished down the field on a number of occasions. Those races were all on turf and over six or seven furlongs, where he is a lot more effective on the all-weather courses and over the shortest distance. It is worth noting that he is 2/2 over course and distance.

Trainer Roger Fell has been among the winners recently with a record of three winners and places (37.50%) from eight runners, for level stakes profits of 22.50 and 24.38 and an Impact Value of 3.21.

His strike rate with sprinters is almost 3.5% higher than his overall which is also worth noting.

Jockey Ben Sanderson has previously had a couple of winners here at Southwell and importantly he is able to claim an extremely useful seven pounds.

The Instant Expert highlights the good showing of Zylan here but also shows that he is a full 13 pounds higher than for his last victory on the all-weather. He has won from a one pound higher mark on the turf with today’s jockey on board which is encouraging.

The Pace report shows that early leaders here over this distance have a good record, with 20.46% of them going on to win the race, for a level stakes profit of 59.37 and an Impact Value of 1.52.

There doesn’t appear to be any real out and out front-runner in this field, although a few of them are usually quite handy.

Zylan tends to be held up in his races but he was more prominent in his two wins here so it will be interesting to see how quickly he breaks away. 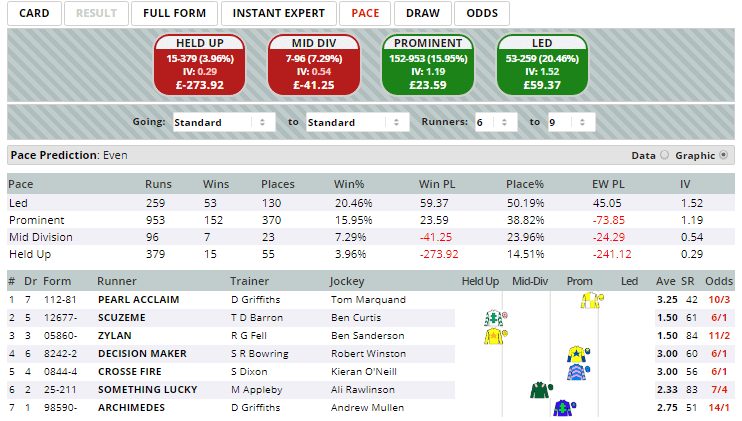