Act Now makes on to The Shortlist with a nice full line of green and the top score of 15.

She races in a three miles and two-furlong handicap chase which is just her second start over the larger obstacles.

Act Now was well beaten by superior rivals on her chasing debut which was also over a distance that was short side.

Her previous run over today’s distance ended with a win at Hereford and a return to it today will hopefully bring out the best in her.

He also has an excellent record with his runners that are changing race distance from their previous run. With these such runners, he’s had five winners (29.41%) and nine places (52.94%) from 17 runners, for level stakes profits of 18.00 and 21.11 respectively and an Impact Value of 2.70.

The Instant Expert report highlights the good showing of Act Now and she appears far more suited to today’s conditions than her rivals.

A couple of the shorter priced runners in this field are quite a bit higher in the ratings than for their previous victories.

The Pace report shows that early leaders here over this distance have a very good record, as 34.78% of them have gone on to win the race, for a level stakes profit of 17.07 and an Impact Value of 1.79.

Leo Luna and Act Now have the highest pace scores in this field and look extremely likely to be taking them along through the early stages of this race. 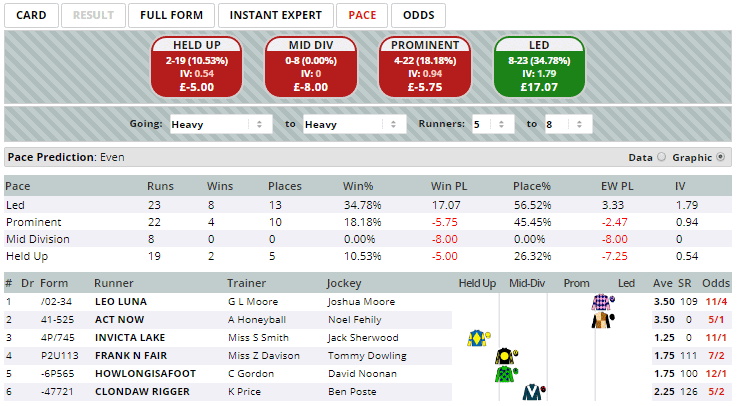