He runs Jack Blane in a seven-furlong handicap on the all-weather at Southwell today and he was last in action here a week ago.

Jack Blane has had a win and two places in his last six races, so have been running well. He was staying on strongly here last week over six furlongs, therefore, the step up in trip to seven furlongs looks sure to suit him and he runs from the same mark today.

It is worth noting that this four-year-old tops the Speed Ratings with a mark of 69.

The Trainer Snippets on the racecard show that as well as having a good record with runners coming out again quickly, Dalgleish has been in good recent form. Over the past 30 days, he’s had seven winners (19.44%) and 16 places (44.44%) from 36 runners, for level stakes profits of 23.50 for both and an Impact Value of 1.69.

Jockey Philip Makin has also been among the winners recently, and he is 2/8 (25%) over the past two weeks for a level stakes profit of 21 points and an Impact Value of 2.18.

There are not too many sections of green on the Instant Expert report, with just three of the 12 runners having any.

Jack Blane has one section of green and four of amber, showing that he is reasonably well suited to today’s conditions. He is also just the one pound higher than for his last victory so if he can reproduce last week’s promising run then I think he has a good chance.

From looking at the Pace report we can see that early leaders here over this distance have the best record, with 14.86% of them going on to win the race, for a level stakes profit of 73.25. It is worth noting that prominent runners also show a level stakes profit from a large sample of runners.

Jack Blane is generally held up and waited with and I wouldn’t be surprised to see Makin do that again today, especially as he is running over an extra furlong this time. 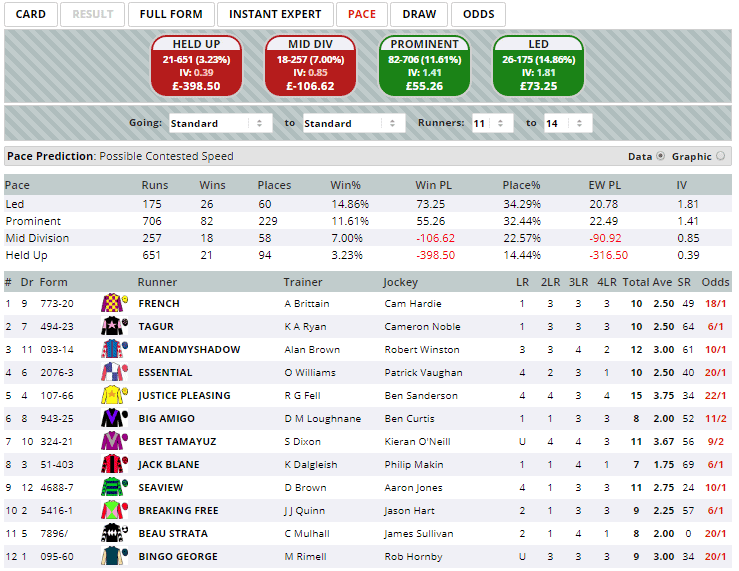