The Trainer Jockey Combo Stats report shows that Jedd O’Keefe and Jack Garrity have an impressive record together at Newcastle over the past year. From 17 runners, they have had four winners (23.53%) and ten places (58.82%), for level stakes profits of 15.00 and 44.65 respectively and an Impact Value of 2.17.

They have just the one runner together at Newcastle today, where Desert Ruler goes in a 12-furlong handicap and is currently priced around 11/4.

Desert Ruler has shown consistent form over his last six races, with three second places and a win here over ten furlongs last time out. He stayed on nicely then and will likely appreciate the extra two furlongs they are racing over in this.

He only has to saddle one extra pound for that win and with a mark of 79, he is at the top of the Speed Ratings.

Jack Garrity is 1/3 over the past 30 days and also has a reasonably good record here at Newcastle.

There are only a few sections of green on the Instant Expert report, however, Desert Ruler looks well suited to today’s conditions, with three sections of green and two of amber. As mentioned earlier, he is just the one pound higher than for his last victory.

The Pace report shows that horses that are held up have the best record here over this distance, with 10% of them going on to win the race. There actually doesn’t appear to be too much of a bias, however, and there isn’t a great deal of early pace on display in this field.

Desert Ruler was prominent in the early stages of his win last time out and it wouldn’t be a surprise to see Garrity try to take a similar position again. 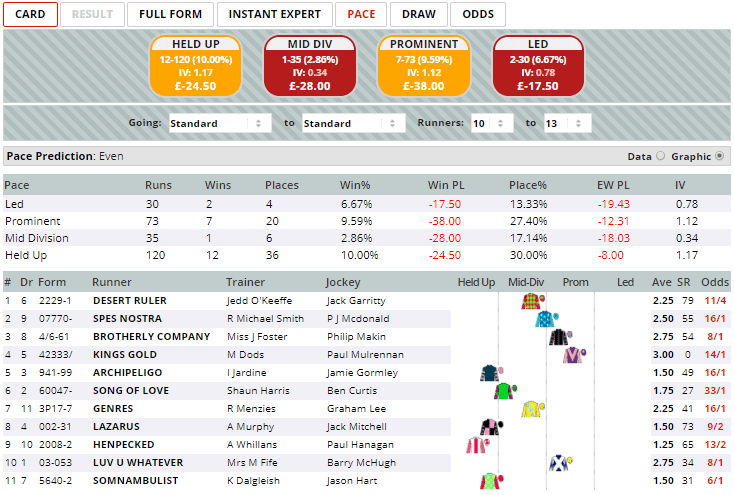