He runs two over the shorter distances at Southwell today, and I am going to be taking a closer look at Hody Ridge, who runs in a competitive seven-furlong handicap and is currently priced around 9/1.

Kody Ridge has been running reasonably well and was a winner here over six furlongs where he stayed on well to give the impression he may step forward again over an extra furlong. He has been raised three pounds for that win, however, Ben Sanderson takes over the steering duties today and he has a seven-pound claim, meaning that Kody Ridge is effectively four pounds better off.

As well as being good with sprinters, his record on the all-weather track is positive, with a level stakes profit of 28.29 from 170 runners.

Ben Sanderson has also managed a couple of winners in the last month from his nine rides, and this has produced a small level stakes profit and an Impact Value of 1.94.

When looking at the Instant Expert report we can see that Kody Ridge is reasonably well suited to today’s conditions, with two sections of green and one of amber.

Queens Royale comes out well on this report, with three sections of green and two of amber and could pose a credible threat.

The Pace report shows that early leaders here over this distance have the best record, with 14.77% of them going on to win the race, for a level stakes profit of 72.25 and an Impact Value of 1.79.

Kody Ridge is usually prominent during the early parts of his races and with an excellent draw in stall 12 I am hopeful that Sanderson will be able to get him into a good early position. 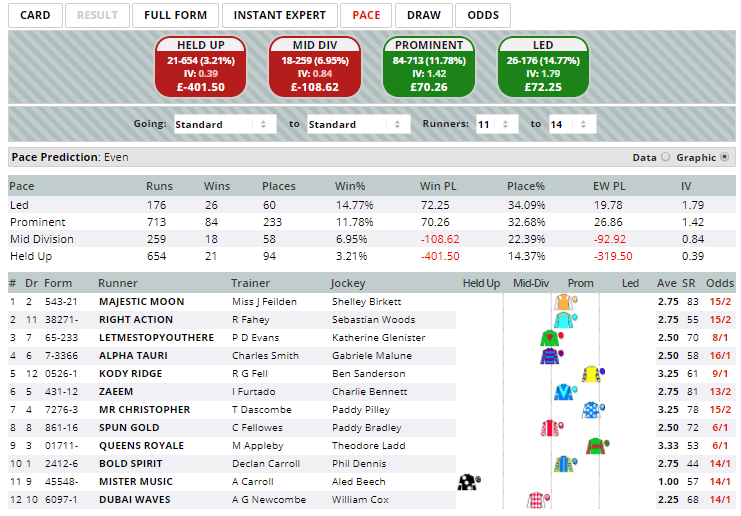