Horses For Courses is the report that is available to all registered users on a Friday, and it shows that Easy Tiger flourishes when he races at Lingfield. From eight races here, he has managed three wins (37.5%) and five places (63.5%), for level stakes profits of 23.75 and 29.54 respectively.

He races in an open looking ten-furlong handicap today and is currently priced around 7/2.

Georiga Cox takes over form Liam Keniry today and I think he could be dangerous from just a two pound higher mark than for that win.

With the Instant Expert report on the ‘Place’ setting, it shows that Easy Tiger is nicely suited to today’s conditions, as he has four sections of green and one of amber. He is also just the two pounds higher than for his last victory, so if he runs up to his mark he will be extremely tough to beat.

Dutch Uncle is another who comes out well on this report, also having four sections of green and one of amber. He is actually four pounds lower than for his last win so could prove dangerous now back in favourable surroundings.

The Pace report shows that early leaders and prominent runners have the best record here over this distance.

Easy Tiger likes to race right up with the pace and I think it is likely he will do it again today in this small field. There is plenty of pace in the race so he won’t have things are his own way, however, I am hoping he will be strong enough to hold on. 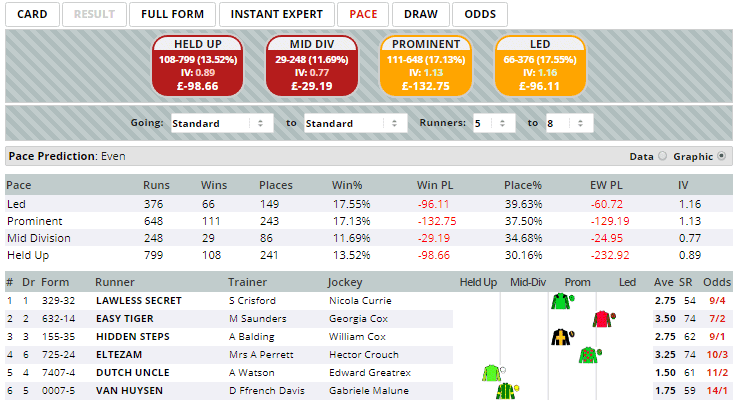