The Trainer Snippets report shows that Archie Watson has a superb record when turning out his horses within seven days of their previous race. From his last 30 such runners, he’s managed 15 winners (50%) and 20 places (66.67%), for level stakes profits of 26.67 and 29.00 respectively and an Impact Value of 3.58.

He runs Captain Lars for the first time here at Chelmsford today (he was claimed after his run at Lingfield last Friday) and runs in a six-furlong handicap.

Captain Lars has been running well over the winter with two wins and a second place from his last six races. Seven furlongs appeared to stretch him last time out and a return to six looks sure to suit. He has won from this mark previously, therefore, if he responds well to his new surroundings he has a chance in this at a current price of around 10/3.

The Pace report shows that early leaders here over this distance have an excellent record, with 28.39% of them going on to win the race, for a level stakes profit of £122.38 and an Impact Value of 1.96.

It appears that the early lead is going to be between Tavener and Captain Lars, as they have comfortably the highest pace scores and are usually at the forefront of their races. They are drawn next to each other in stalls four and five so the race could be run at a fierce pace.

I am hoping that Captain Lars’ ability over five furlongs will see him come out on top in the pace stakes and that he will also have enough to hold on during the final furlong of the race. 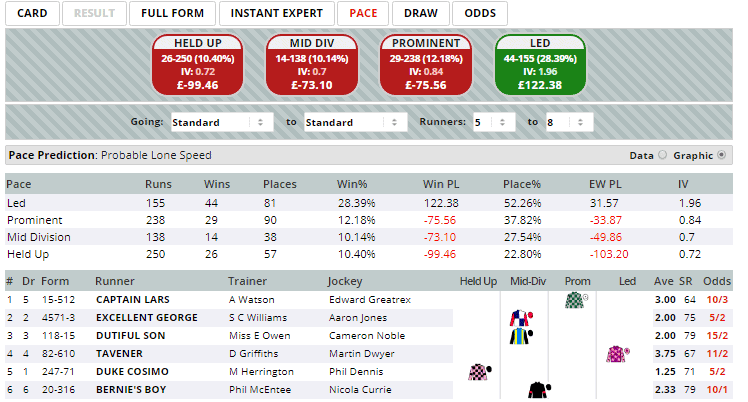