Horses For Courses is the report that is available to all registered users on a Friday. It shows that Barton Gift has a great record when racing at Bangor. He’s managed three wins (60%) and four places (80%) from five races, for level stakes profits of 40.50 and 48.70 respectively.

He goes in a handicap chase over almost three miles and six furlongs and a race that has an extremely open look to it.

Barton Gift has been pulled up in three of his last four races, however, it was just five races ago in the race last year when he was last seen in the winners enclosure. He is just the one pound heavier here today, so a repeat of that performance would surely see him go close.

That record improves much further when we take just the runners over the marathon distances. From his last nine such runners, he’s had four winners and places (44.44%) for level stakes profits of 44.00 and 48.95 respectively and an Impact Value of 4.00.

Barton Gift really stands out when looking at the Instant Expert report with four sections of green and one of amber. This shows that he appears nicely suited to today’s conditions and as mentioned earlier, he is just the one pound higher than for his last win.

There are few sections of green among the rest of the field, which is a good sign for Barton Gift’s chances.

The Pace report has very little data to go on, but what is there heavily favours early leaders over this distance.

Barton Gift is a usual front runner and I am hoping that a return to favourable surroundings will bring about a return to his best form, which will see him tough to beat 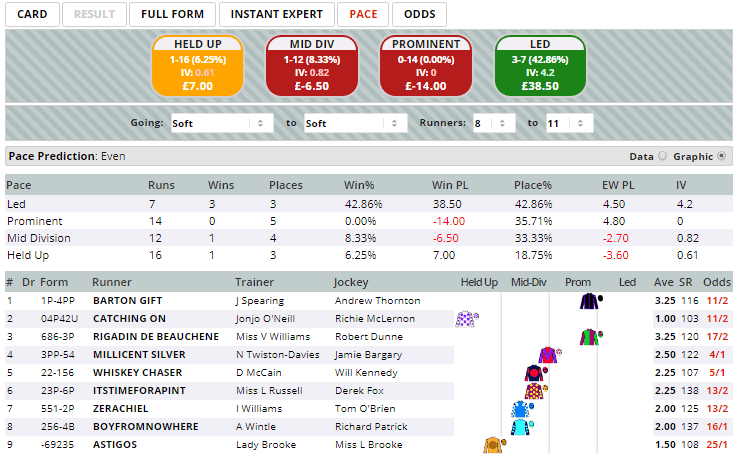