Modulus makes it onto The Shortlist with a score of ten, having three sections of green and one of amber. He hasn’t run here at Catterick before so has a grey section, but nonetheless, her looks well suited to today’s conditions and is a big price at around 12/1 currently.

He races in a two miles and three furlongs handicap hurdle and a race that has a really open look to it.

Modulus won three races in a row around this time last year, but third of those races being in testing conditions at Henham from today’s mark. He was stepped up in class significantly after that and came up short and last time out he races over a distance that was on the short side. A return to a trip that suits him in favourable conditions will hopefully bring out the best in him and I’m hopeful of a big run.

Trainer Peter Winks doesn’t have too many runners but he’s been in good form over the past month. He’s had two winners (40%) and three places (60%) from five runners, for level stakes profits of 5.50 and 11.00 respectively and an Impact Value of 3.45.

He also has a strike rate of over 3% higher with his shorter distance runners than he does with his overall strike rate.

Claimer Ryan Winks has a good record from a small sample of rides over the past month. He’s had a winner (25%) and two places (50%) from four runners, for level stakes profits of 1.50 and 6.00 respectively and an Impact Value of 2.16.

There are not a lot of green sections when looking at the Instant Expert report, bit Modulus confirms his good showing and looks comfortably the most suited to today’s race. As mentioned earlier, he is also racing from the same mark as his last victory, therefore if a return to favourable conditions brings out the best in him he feels overpriced at 12/1.

There isn’t large sample to go with when looking at the Pace report, but horses that run in mid-division have the best record with 25% of them going on to win the race for a level stakes profit of 6.28 and an Impact Value of 2.12.

When winning his races, Modulus tends to be quite prominent and I would expect Winks to employ similar tactics here today. 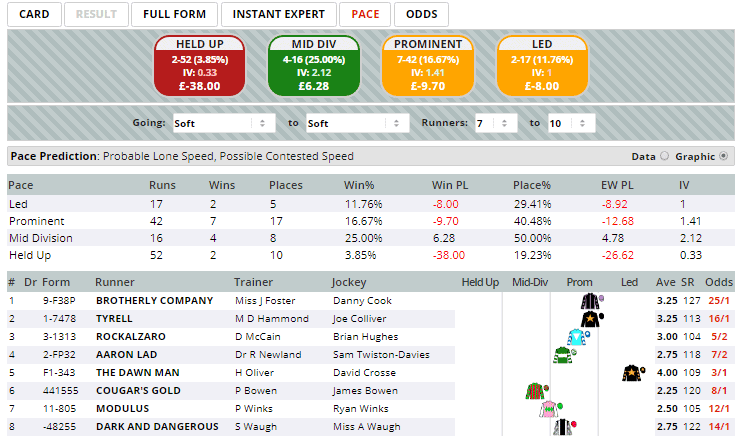