He runs Taxmeifyoucan in a two miles novices’ hurdle at Kelso today and he is currently priced around 7/2.

Taxmeifyoucan has been running on the flat and has won three out of his last four in that code. He was going well on his last run over hurdles before swerving and unseating his rider at the last, and prior to that, he battled well to land a juveniles’ hurdle over two miles at Stratford.

With a rating of 89 on the flat, I think this four-year-old has plenty of potential over the jumps and can give the two more fancied runners (rated 123 and 125) a decent race.

As well as having a good record with his runners over the shorter jumps distances, Dalgleish has a particularly good record here at Kelso. Over the past year, he’s had four winners (44.44%) and six places (66.67%) from nine runners, for level stakes profits of 34.48 and 40.21 respectively and an Impact Value of 3.60.

The Instant Expert report shows that Taxmeifyoucan is reasonably well suited to today’s conditions, with three sections of green.

There is very little data on the Pace report to be able to draw any worthwhile conclusions, but Ofcourseiwill has been prominent in his recent races and looks the likeliest to be taking them along in this one. 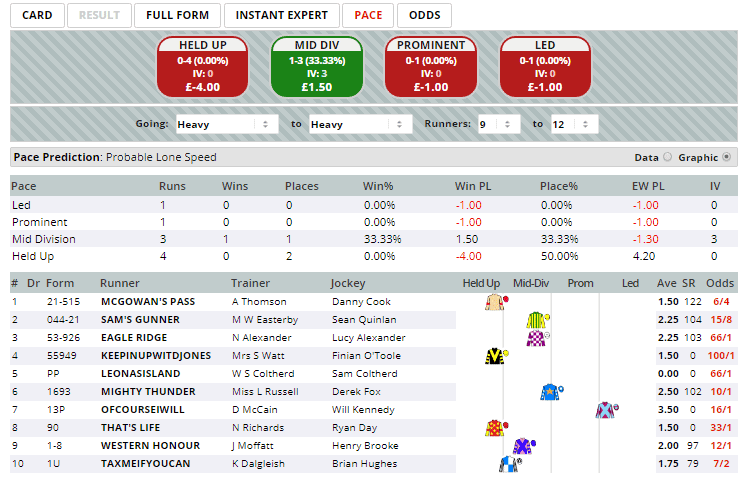