Allthegear No Idea makes it onto The Shortlist at Lingfield today, with a good score of 11 having three sections of green and two of amber. He is a big price at 16/1 for a horse that looks so well suited to today’s conditions and looks worth taking a closer look at.

He runs in a two mile seven furlong handicap hurdle in what is likely to be testing conditions.

He drops down significantly in class for this race and as he ran consistently well this winter over the larger obstacles, running from a mark of 108 gives him a chance.

The Instant Expert report highlights the good showing of Allthegear No Idea and it is worth noting that he is also a full ten pounds lower than for his last victory.

There are few sections of green between the rest of the field so it appears that Allthegear No Idea has an advantage from this point of view.

There isn’t a great deal of data to go on when looking at the Pace report, but held up horses have the highest strike rate.

The early lead looks likely to be between Echo Watt and Allthegear No Idea, as they are both usually quite prominent in the early parts of there races. 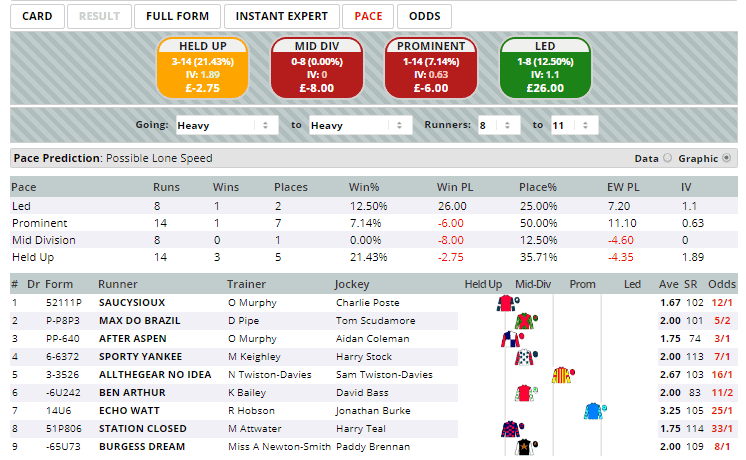 Stat of the Day, 19th February 2018 How to Bet the Cheltenham Festival
Scroll to top