The Trainer Jockey Combo Stats report shows that Antony Brittain and Cam Hardie have a good record together at Wolverhampton. Over the past year, they’ve had six winners (10.34%) and 16 places (27.59%) from 58 runners, for level stakes profits of 3.50 and 8.65 respectively.

They team up with just the one runner at Wolverhampton today, Sooqaan, in an almost nine-furlong handicap.

The current form of Sooqaan has been excellent, with four wins from his last six races.

After winning as easily as he liked at Southwell in January, he was raised a full ten pounds by the handicapper. He still ran well with that weight last time out to finish fourth, and as that was over seven furlongs I think he will be better suited by the extra distance here today.

He has a particularly impressive record with his runners that are turning out again within seven days of their last race. With his last 24 such runners, he’s had seven winners (29.17%) and 12 places (50%), for level stakes profits of 37.75 and 48.55 respectively and an Impact Value of 2.10.

Cam Hardie has been riding well and has shown good form over the last month. From his last 26 runners, he’s managed to grab four winners and places (15.38%), for level stakes profits of 18.75 and 6.45 respectively and an Impact Value of 1.29.

The Pace report shows that early leaders here over this distance have the best record, with 12.88% of them going on to win the race, for a level stakes profit of 45.80 and an Impact Value of 1.36.

What Usain is usually very quickly away and looks the most likely early leader, although he doesn’t have a great draw in stall two. Sooqaan is also usually quickly away and being drawn in a favourable stall seven gives him the chance of grabbing a useful early position. 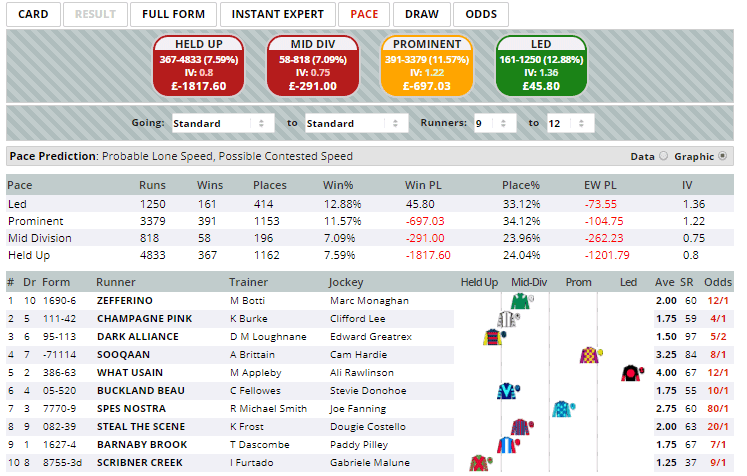